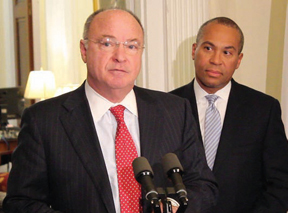 The roulette wheel that is the Massachusetts casino market continues to spin and where the ball will land remains a mystery.

Two and a half years after Governor Deval Patrick signed the Expanded Gaming Act into law and more than two years after the Massachusetts Gaming Commission held its first meeting, the only license awarded is the lone slot parlor license to Penn National Gaming for a 1,250-slot facility at Plainridge Racecourse in Plainville on the Massachusetts-Rhode Island border.

The rest of the market remains in flux.

“Disorganized,” Clyde Barrow, a gaming expert who watches the Massachusetts market closely, said using one word to describe the state’s licensing process. “And I’m trying to be polite.”

And that was before Gaming Commission Chairman Stephen Crosby recused himself from the deliberations and selection of a Greater Boston casino. At the commission’s May 8 meeting, Crosby said his involvement had become a distraction.

Crosby reportedly attended a Kentucky Derby event at Suffolk Downs, a racetrack that is one of the applicants for a casino license. Though Crosby paid his own way to the event, Patrick, who appointed Crosby in 2012, openly questioned the chairman’s judgment.

It’s not the first time his judgment has been questioned during the two-year process. A former business partner owns a stake in land under agreement with Wynn Resorts, and attorneys for Boston Mayor Martin Walsh questioned Crosby’s ability to remain impartial in making a decision on the city’s status as either a host or surrounding community because of public comments.

“The compounding of these issues has now gotten to the point where my participation in the decision-making process has become a distraction and a potential threat to our critical appearance of total impartiality,” Crosby said in bowing out of the debate.

It’s unclear what effect Crosby’s recusal will have on the speed of the process.

“Massachusetts has already taken longer than any state in history to license a casino,” Barrow said.

Crosby, in an interview before the Derby debacle, called Ohio a “ridiculous” comparison. Ohio’s legislation picked the locations for casinos and New York says it will license casinos by the fall, but Crosby said he will believe that when he sees it.

“A year ago we were getting our brains beat in because New Hampshire was going to beat us to the punch,” Crosby said. To date, New Hampshire has not legalized casino gambling.

Massachusetts had to build the state agency from the ground level at the same time it developed regulations, Crosby said. Lately, he’s taken to pointing out that it is some of the casino companies who are now asking the commission to put the brakes on.

“We set out with two priorities,” Crosby says. “One was the integrity of process and two was robust competition for the licenses. We didn’t say speed. Both of those require time.”

On June 23, the Massachusetts Gaming Commission is scheduled to issue a full-scale casino license in Western Massachusetts. MGM Springfield, an affiliate of MGM Resorts International, is seeking a conditional award of the license for its $800 million facility in downtown Springfield citing an effort by casino opponents to repeal the state’s gaming law.

Once a license is issued, MGM would be on the hook for $200 million, including an $85 million payment to the state for the license. There is no provision in the law to make that refundable if there is a successful repeal.

“That’s something the legislature did not anticipate,” Barrow says of the effort afoot to repeal the law.

On May 5, the Massachusetts Supreme Judicial Court heard arguments on whether to allow the ballot question. The state’s highest court took the case under advisement and is expected to rule by July.

The commission has not acted on MGM’s request. Meanwhile, statewide polls continue to show support for casinos is strong as long as the facilities are in someone else’s back yard. In April, Western New England College issued results of a survey of 477 adults that showed 59 percent support casinos in Massachusetts while 34 percent are opposed. Seven percent of those surveyed either were undecided or declined to answer, according to the results.

MGM’s application in Springfield is the last bid standing in what was once the most robust market in Massachusetts. A proposal by Ameristar in Springfield was virtually over before it even gained a foothold and Penn National moved along to partner with Plainridge after Springfield leaders picked the MGM proposal to support. In September, Hard Rock was sent packing by voters in West Springfield and in November Mohegan Sun failed to win support of voters in Palmer for a casino there.

One of the requirements of the Massachusetts law is winning support through a referendum in the city or town where a casino is proposed.

Mohegan Sun has since teamed with Suffolk Downs for a casino in Revere after Caesars Entertainment bowed out of its deal under pressure resulting from the company’s background check.

The battle for a casino in the Greater Boston market, known as Region A in the legislation, now pits Las Vegas mogul Steve Wynn of Wynn Resorts against Mohegan Sun, which operates one of the country’s largest Indian casinos in nearby Connecticut.

Wynn is proposing a $1.6 billion hotel and casino in Everett on a former Monsanto chemical plant site that needs to be cleaned up. The facility would be across the Mystic River from the Boston skyline.

In recent months, newly elected Boston Mayor Martin Walsh has been a vocal player in the debate over a Greater Boston casino. He hasn’t picked sides, but wants more of a cut of the action no matter which company gets the license. The mayor unsuccessfully lobbied the gaming commission to make Boston a host community, which would give it more of a say and more revenue from either of the two facilities approved by the gaming commission (and would have subjected the two proposals to a new referendum, the results of which would have been questionable).

The commission gave Walsh, once a vocal supporter of the casino law as a state representative, an extension to try and work out a deal on his own with the developers, but when that was unsuccessful, the four remaining commissioners declared the two venues outside the city limits.

Cities and towns designated as surrounding communities are also entitled to compensation, but it’s typically a small percentage of what a city or town gets for hosting a casino.

In a letter to the commission in April, attorneys for Walsh called on Crosby to remove himself from the host community discussion, citing biased comments he made against Boston.

“Throughout the process, Chairman Crosby has made several statements, which the city deems prejudicial, including criticizing the city for asserting its host status on behalf of its public,” the letter states.

Crosby had remained an active participant, but the Derby event was the final straw.

Crosby is also named in a lawsuit brought by Caesars Entertainment in December that alleges Crosby had conversations with Wynn urging him to make a bid for an Everett casino. A former business associate of Crosby’s, Paul Lohnes, has an ownership interest in the land and stands to profit from Wynn’s purchase of it.

Crosby knew Lohnes was involved in the land deal in the fall of 2012, but waited until August to disclose it to Patrick and until October to seek an opinion from the state’s Ethics Commission.

At one point the property was under agreement with Wynn for $75 million, $40 million above market value.

Crosby did not participate in a discussion and vote by the commission in approving the revised price negotiated by Wynn for the Everett land.

Caesars withdrew as a partner in the Suffolk Downs bid after questions were raised by commission investigators about the company’s ties to hotel operator Gansevoort, whose principal is alleged to have ties with the Russian mob.

The company’s suit against Crosby and the commission is pending in U.S. District Court. A deadline for discovery in the case was May 30.

The commission now expects to award the Greater Boston license sometime in August or September, though no exact date is provided in its published timeline.

In Southeastern Massachusetts, the licensing landscape is even cloudier.

“That’s the biggest mess of all,” Barrow says.

The Mashpee Wampanoag Tribe, which has proposed a $500 million Indian casino in Taunton, remains a key player in the region. In order to build the casino, the tribe has to overcome federal legal hurdles, including the 2009 U.S. Supreme Court ruling Carcieri v. Salazar, which calls into question the U.S. government’s authority to take land into trust for tribes recognized after the Indian Reorganization Act of 1934.

The Mashpee tribe gained federal recognition in 2007, but in documents filed with its land application has said the high court ruling does not apply because the tribe was under federal jurisdiction in 1934, a key distinction.

The federal Bureau of Indian Affairs has not yet ruled on the tribe’s application, though it is currently under review by environmental regulators. Cedric Cromwell, chairman of the Mashpee Wampanoag Tribe, says the Final Environmental Impact Statement is expected soon and a decision should come on the heels of that. “We’re right on track,” he says.

There is skepticism. “The tribe has been saying their casino is imminent for seven years,” Barrow says. “I guess it depends on what your definition of imminent is.”

Still, there’s no question the prospect of a tribal casino is having an impact. “Because of their presence in Taunton, it’s having a dampening effect on commercial operators to come into the region,” Barrow says.

KG Urban Enterprises, a company that hopes to build a casino on the New Bedford waterfront, has had difficulty attracting a gaming operator to invest in the project with the tribal casino looming.

Under a tribal-state compact reached between the Mashpee Wampanoag and Patrick, approved by the BIA, the tribe would not have to pay the state any revenue if a commercial casino is licensed in the same region. If the tribe has the only casino in Region C, it would pay the state 17 percent of its gross gambling revenues, under the terms of the compact.

Commercial casinos pay a 25 percent tax, which would put them at a competitive disadvantage.

Wynn has said commercial companies should pay the same rate as the tribe.

“We have no control over setting the tax rate,” Crosby says.

Meanwhile, Foxwoods, another Connecticut tribal casino, has entered the commercial market in Massachusetts in Fall River. Rush Street Gaming of Illinois is also kicking the tires on a Southeastern Massachusetts bid, but has not announced a deal with a landowner.

The Massachusetts Gaming Commission recently extended the deadline for Phase 2 applications in the region by two months until September 23 and doesn’t expect to issue a license in the region until February 2015.

In pushing his proposal in Everett, Wynn has asked for changes in a state law that he thinks is flawed, including a requirement that anyone who wins $600 or more at a Bay State casino must pay the income tax at the casino—something the commission has acknowledged should be looked at by the legislature.

Wynn also objects to having compulsive gambling services inside his casino. He’s repeatedly said he’ll walk away from the Massachusetts market if changes aren’t made.

Barrow doesn’t doubt that the casino legend means business, though he believes in large part that the Massachusetts legislature got things right in the law that was passed.

“This is a guy who has been in a lot of jurisdictions and then disappeared,” Barrow says.

Most of his revenues are coming from Macau and his mega facilities in Vegas, he adds. “Massachusetts is a small player in his world.”