The tribe would operate a casino in Taunton 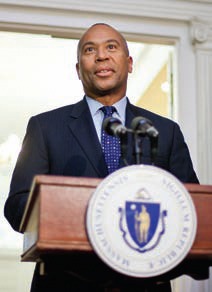 Massachusetts Governor Deval Patrick and the Mashpee Wampanoag Tribe have reached an agreement on a state/tribal gaming compact by which the tribe would pay 21.5 percent of casino revenue at its proposed Taunton site to the state. Commercial casinos, by contrast, will pay 25 percent, as well as an million licensing fee. Patrick was expected to submit the compact to the legislature for ratification last month. The tribal council must also ratify the 15-year compact.

The compact allows the tribe to build a 150,000-square-foot casino on 146 acres in an industrial park. The governor praised the 60-page agreement, which was negotiated over several weeks. “This is a good deal for everyone,” he said. “If this compact is approved, it will allow the Mashpee Wampanoag to open a unique facility that is governed and regulated by the tribe itself, in partnership with the state.”

Mashpee Chairman Cedric Cromwell was also pleased. “This is the first step in an economic development plan that will bring long-term prosperity to the Mashpee Wampanoag Tribe while also bringing much-needed job opportunities and revenue to the commonwealth.”

The state law that authorizes three casino resorts and a slot parlor gives a federally recognized tribe first opportunity to apply for a license in the Southeastern Zone.

Although the compact agreement is important, the primary roadblock to the tribe being granted a license to operate a casino in the Southeastern gaming zone is the federal government putting the land into trust for the tribe. The U.S. Supreme Court in 2009 ruled that tribes recognized after 1934 by the federal government cannot put land into trust. The Mashpees were recognized in 2007.

The state law that authorized the casinos stipulates that a federally recognized tribe had to be able to demonstrate by July 31, 2012 that it is likely to be able to put land into trust. The tribe seems likely to meet all of the other terms of the law. It has already met the provision of approval by voters of the host city, Taunton. Voters approved the casino in June in a non-binding election.

If the tribe does not meet all of the requirements, the Massachusetts Gaming Commission is obliged to begin considering bids from commercial developers for the Southeastern Zone. Although the commission would be issuing the tribe a casino license, the Taunton casino itself would actually come under the jurisdiction of a tribal gaming commission.