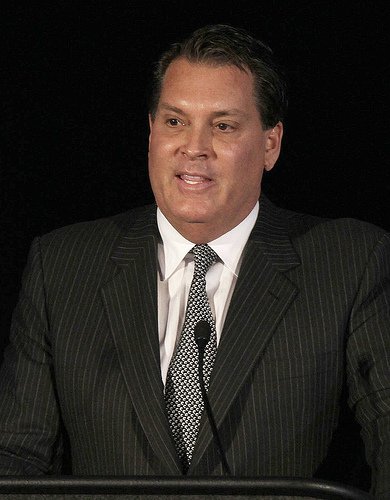 Mark Juliano, chief executive officer of Trump Entertainment Resorts, was recently named president of the Casino Association of New Jersey, succeeding Joe Corbo of Borgata as the de facto voice of the New Jersey casino industry. An industry veteran with more than 30 years of experience, Juliano joined the Trump organization in 2005, as chief operating officer, later moving to CEO. He oversees operations at Trump Taj Mahal, Trump Plaza and Trump Marina. Juliano previously served as president of Caesars Palace, Las Vegas, and president and COO of Caesars Atlantic City. Global Gaming Business Publisher Roger Gros and Editor Frank Legato spoke to Juliano about his hopes for the city and its leading industry, one day before Governor Chris Christie made headlines with his sweeping plan for change.

GGB: Congratulations on being named president of the Casino Association of New Jersey. I don’t know if that’s an honor these days, because it’s such a difficult period in Atlantic City.
Juliano: Thank you. And it is an honor. It’ll be a challenging year, for sure, but we’re up for the
challenge.

Is there one issue in the city that you can pinpoint that is more important than the others?
I think the most important issue out there is just an overall recovery of the economy. Customer and consumer confidence is the single most important thing we need to swing back in our favor. It’s important to keep in mind that gaming is a discretionary spend; it’s something people only do when they feel good about their ability to spend. So once that turns around, that will be a big help.

The second biggest issue here for us in Atlantic City is competition in neighboring states. So we’re keeping a close eye on what’s going in Pennsylvania. I think the impact of the slot business has been absorbed, and we don’t really see any further erosion of our slot business due to what’s happening in Pennsylvania. But table games just started there, and we’re anxiously awaiting what happens there.

Have you done proactive marketing to defray the effect of the table games?
We have. I know I speak for the Trump organization, but I’m sure the other properties in town have done the same thing. We’ve reached out to our mid-range table game player, because we think that’s the one who will be most impacted by the convenience of Pennsylvania. We have offered them quite a few promotional offers and incentives to continue to come to Atlantic City. It’s a very good situation for our customers.

Sports betting has been a consistent issue since the mid-’90s, when New Jersey residents were denied the chance to vote on it. Are there any legs left on this that would benefit Atlantic City?
Obviously you’re aware of Senator (Raymond) Lesniak’s bill. We would love to see it happen. Sports betting is, in and of itself, not an enormous money-maker. But it’s an amenity that appeals to a lot of people, and it gives you one more reason to come to Atlantic City, and we’re always looking for things like that. Unfortunately, even if the Lesniak bill passes, it will still require federal legislation to make it a possibility here in New Jersey. So we are very supportive of it, but it certainly has a long road ahead of it.

Even if all these hurdles are overcome, the other states will be able to offer sports betting too. So it’s kind of a wash.
Again, the thing that’s different about New Jersey and sports betting is that we really do have all-in destination hotels. We have a whole package of amenities that neighboring competitive states do not have, along with all the restaurants, entertainment, convention space—it really is a much better experience than in Pennsylvania or Delaware.

Another issue before the state legislature right now is online gaming, an intrastate version of that. Where does the association stand on that?
The industry as a whole has not taken a stand on it because different companies have different views.

I personally don’t think online gaming is a good thing; there should always be an effort of some sort that people need to make to game, and to have people sitting around in their pajamas in their kitchen all day long gambling on their computers is not a good thing. If it happens, then we’ll have to deal with it.

Will the subsidies that the Atlantic City casinos have been providing to the racing industry in past years be over when this current agreement is over?
It’s our strong feeling that that $30 million a year could be far better spent than subsidizing purses at the racetrack. And I know that I speak for everybody in the association when I say we would be glad to continue the $30 million subsidy, but for a marketing fund that the Atlantic City Convention & Visitors Authority perhaps could manage. Everyone has absorbed that expense into their budget and we’re happy to continue, but we’d rather it be spent in a more productive way.

Have you had discussions with Governor Christie about Atlantic City? What’s his attitude toward the resort and the casino industry in particular?
I’ve only had one brief conversation with him. He is very interested in having us make this transition we’ve been talking about for a while. It needs to morph into more than just a gaming town. It needs to be a resort destination, a convention town, a retail town that appeals to a cash-paying customer as well as a gamer. He’s very interested in that, and we’ll be anxious to spend some time with him before the release of the gaming report. He has really been receptive to our ideas on how we can make that happen.