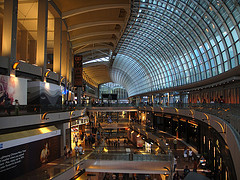 Las Vegas Sands may put the mall (right) in its Marina Bay Sands in Singapore up for sale in the next two to three years, says company President Michael Leven. Speaking in Pennsylvania at the opening of the company’s Sands Bethlehem hotel, Leven said the performance of the overall property would provide a full return on investment over the next four to five years.

“We did over a billion dollars in our first year in EBITDA,” he said. “We expect that to grow. I think a four-to-five-year payback in that situation, anybody would be happy with that return on investment.”

But a sale of the mall could reap a windfall for the company, he said.

“We should do that very easily without even selling an asset like our mall, which we expect to sell maybe in 2013 or 2014, which can provide as much as $4 billion back for our $6 billion investment just on the mall alone,” Leven said.

The company sold the mall at the Venetian in Las Vegas for nearly $2 billion in 2006 to General Growth Corp., which later went bankrupt.