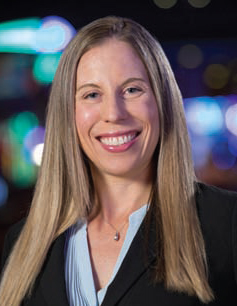 “But no one has the secret sauce about millennials just yet,” jests Keel, CEO and general manager of Akwesasne Mohawk Casino Resort.

She surmises the key lies in the experience. Indeed, that approach speaks to any generation, Keel adds. Experience means gambling, plus food and beverage, entertainment, social interaction, the hotel room, pool, nightclub and more. “Being able to track the guests’ experience along the way and what they are spending their money on is paramount. However, we can’t be too intrusive. It’s got to be organic.”

The future for Keel unfolded when she took a position with Hyatt Hotels in college. She worked the front desk, as a concierge and as an executive administrative assistant. At the urging of her employer, she got accepted into the corporate management trainee program. She trained at the Hyatt Regency Chicago, the company’s flagship property.

“I worked in all departments, and then focused on the rooms division,” she recalls. “I was assistant front office manager, housekeeping manager and renovation manager. That experience led to a move to the Hyatt Regency Lake Tahoe, where I got my introduction to the gaming industry as casino services manager.”

Keel managed the VIP office for gaming guests and was the liaison between the casino and hotel divisions of the property. From there, she joined Golden Gaming (now Golden Entertainment) in 2006 as assistant general manager. “I oversaw various departments, which helped me to really understand the intricacies of a casino,” she says.

She rose to vice president and general manager for Golden before joining Reserve Casino Hotel in 2013 as general manager. In 2015, Keel assumed her current position at Akwesasne in upstate New York, not far from the Canadian border.

The steady rise of Keel’s career owes much to her mentor at Golden, Jef Bauer.

“He gave me my first shot at upper management even with my limited gaming experience,” Keel says. “He told me, ‘I have always looked at potential over experience. Building strong managers has been most effective when working from a clean slate.’ He taught me casino marketing. He also taught me to have fun at work. If you are not enjoying what you are doing, you won’t do it well.”

Keel spends a lot of time responding to emails, walking the floor and attending meetings. But the ideas that arise change daily. “You encounter something new each day.”

The future is bright for newcomers to the industry, she says.

“Learn what you can from as many people as you can. Learn from cooks, housekeepers, the finance team, dealers, slot attendants,” Keel says. “Learn how they do their job, what they like and what they don’t like.

“Talk to guests. Listen to their concerns. Know how to read a financial statement and use your learning to make the numbers better.

“But don’t act like you are better than anyone else. Pick up trash, bus tables, pay a jackpot, help make a bed. Respect what the team members do and they will respect you.”