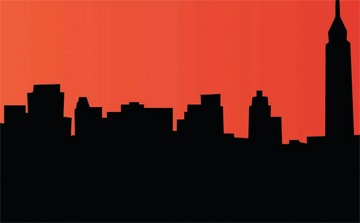 The last day of June must have felt like tax time at the Schenectady offices of the New York Gaming Commission. Seventeen developers filed last-minute applications for four state casino licenses, some just beating the 4 p.m. deadline. Each applicant had to provide 20 copies of each application to be in the running for one of the licenses.

Caesars Entertainment alone submitted 6,000 pages of documentation to support its bid, and one publication speculated the regulators may have to wade through 25 tons of paperwork, literally, before they’re through.

Big names in the gaming industry including Caesars, Genting and Mohegan Sun will vie for the Class III licenses with Hard Rock, Penn National Gaming and the Cordish Companies, Saratoga Raceway with Rush Street Gaming, and Greenetrack. Lesser-known applicants include a team that wants to develop a gaming hall near Howe Caverns, a nature destination in Schoharie County.

The latter project includes Full House Resorts as the gaming partner and Michael J. Malik as the developer. Malik is an Indian gaming consultant-turned-operator who has coordinated casino projects in California, Michigan and New York, the Albany Times-Union reported.

“The first time I saw the site, I knew it was a winner,” Malik said. “I’ve developed many resort destinations before, and this site has all the ingredients needed to be a successful destination resort.”

Emil Galasso, owner of Howe Caverns, says he may like to see a water park and dinosaur theater with a hotel as part of the new resort destination.

Orange Is The New Green

At the other end of the spectrum is Caesars Entertainment, which has submitted its bid to develop an $880 million Caesars New York casino in Woodbury, Orange County, near the giant Woodbury Commons outlet mall.

“We have a tremendous opportunity to bring the Caesars brand to New York state and create a world-class entertainment facility, adding a new destination to the Total Rewards loyalty network and attracting visitors from throughout the region and the world,” said Caesars Chairman Gary Loveman.

Caesars estimates a total of $230 million in annual tax revenues with $29 million annually going to the local community and $10 million to Orange County. The project is expected to create some 4,500 direct jobs, including 1,500 construction jobs and roughly 3,000 permanent jobs.

To sweeten the pot, the company also pledged a minimum of $20 million to improve traffic near the proposed resort at exit 131 on the New York Thruway.

Empire Resorts, which wants to build the Montreign Resort Casino in the Catskills, delivered 280 boxes to regulators escorted by armed security, the Associated Press reported.

Empire’s total combined investment in the resort could exceed $1 billion. The developers seem to be hedging on whether Orange County gets a casino. They have included a disclaimer saying, “The size of the project, including the amount of capital necessary to complete it, will vary based upon the number and location of competitive licenses issued by New York state in our region.”

Orange County has been a bone of contention for developers working farther upstate. Empire’s location, for example, is about 90 miles northwest of New York City. An Orange County casino would be about half that far. It’s been speculated that any casino that is closer to the New York City metropolitan area with its vast population base would likely siphon business from casinos in Sullivan or Ulster counties; two developers, Foxwoods and Pinnacle Entertainment, actually withdrew from the running due to concerns about an Orange County gaming hall.

Genting, the Malaysian casino giant, has also placed bids in Orange County?twice. A company spokesman said Genting submitted bids for two casinos, Sterling Forest Resort in Tuxedo and Resorts World Hudson Valley in Montgomery. The Malaysian news publication Staronline.com noted that Genting’s financial strength and proven success at the racino at Aqueduct makes it a contender to beat; others say its decision to bid twice—in essence, to have a Plan B—may weaken its position among regulators.

Cordish Companies and Penn National Gaming also filed jointly for an Orange County casino. The plan for these strange bedfellows (who clashed in a bitter Maryland referendum fight) is to build in South Blooming Grove, which would include easy access off a major thoroughfare, Route 17. The $750 million casino about 60 miles north of Manhattan would bear Cordish’s famous “Live!” brand. The Cordish-Penn National venture would include more than 3,000 slot machines, 250 table games, a hotel with about 300 rooms and a spa and fitness center.

As an added twist to their bid, Cordish and Penn National have founded a nonprofit organization called H2V2 that will work to attract new or existing out-of-state manufacturing, computer science and research businesses to the region. The companies will support the organization with a $1.5 million annual grant “in perpetuity,” according to Cordish officials.

“No other applicant can match our comprehensive plan to maximize revenue and jobs in the state of New York,” said David Cordish, chairman of Cordish Companies.

Saratoga Gaming and Raceway’s proposed project, Hudson Valley Casino and Resort in Newburgh, reportedly will not impact a Catskills casino as much as the other Orange County bids, but the economic need isn’t as strong, either.

And Luther Winn Jr., president and CEO of Alabama-based Greenetrack, filed an application for what he called the Grand Hudson Casino and Resort at Stewart Airport in Orange County. 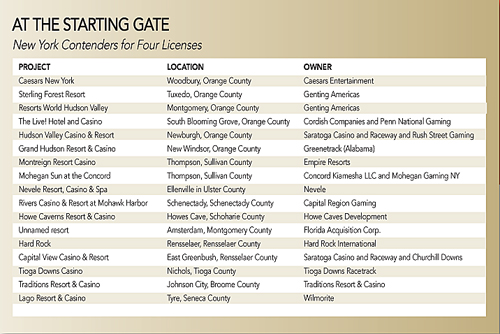 How the state is going to weigh the applications is a matter of opinion.

“This is turning out to be who can generate the most revenue for the state,” griped Charlie Barbuti, the supervisor for Liberty, a Catskills town where Foxwoods had planned its casino. The tribal gaming company said it would be unable to secure financing because of possible competition in Orange County, Businessweek reported. “We can’t generate the same revenue as those closer to a city of 8 million people,” said Barbuti.

But Robert Williams, acting executive director of the commission, insists the intent of the law “is to provide maximum benefit to the state through bringing economic benefit to municipalities that have been economically disadvantaged.” The counties to the north of Orange County certainly fit that description; Sullivan County, for example, has one of the highest unemployment rates in the state.

“A perceived advantage for Orange County is inconsistent with both the statute authorizing the competition and the request for applications,” Williams wrote last month.

Senator John Bonacic, the Republican at the helm of the Senate’s gaming committee, said, “I do believe that proposals in the Catskills will be strong contenders for the licenses, as they most fit the spirit of the legislation.” The original casino measure backed by Bonacic did not include Orange County, he said. It was added when Governor Andrew Cuomo sent the final version to lawmakers after negotiations with legislative leaders, the lawmaker said.

“When I looked at that, I said, ‘Wow, if I were a public casino company, I’d certainly look in Orange County if they allow you to bid,’” Jeff Gural, chief executive officer of American Racing & Entertainment, told Businessweek.

Mohegan Sun is trying to outmuscle them with an application to build a $550 million casino at the site of the old Concord resort in Sullivan County. It would be branded as Mohegan Sun at the Concord, and extend over 60 acres of the 140.3-acre property, the company announced.

“We’re tremendously excited to share our vision for the future of Sullivan County—a vision that features a world-class entertainment and tourism destination that will generate thousands of jobs and new economic development for the region,” said Mitchell Etess, CEO of the Mohegan Tribal Gaming Authority. “Just as important, Mohegan Sun at the Concord will be a unique destination with one-of-a-kind amenities that will attract a new generation of visitors to this former center of tourism in the beautiful Catskills.”

There is only one proposal for a casino in Ulster County, at the site of the former Nevele resort in Wawarsing. The $640 million resort would be “a gateway to upstate and will generate approximately 2,000 construction jobs and an additional 2,000 permanent jobs upon completion,” the company led by CEO Michael Treanor announced; the development is shovel-ready, they say.

Rochester-based Wilmorite Inc. has partnered with Peninsula Pacific of Los Angeles in its bid to build the $425 million Lago Resort & Casino in Tyre, Seneca County. JNB Gaming, which consists of former executives of Peninsula Gaming, bought out by Boyd Gaming two years ago, would operate the casino.

“We look forward to Lago being measured against our competitors, and we look forward to winning the casino license for this region and building New York’s newest and best casino destination resort,” Wilmorite Chairman Thomas Wilmot said in a statement.

Also in the Eastern Southern Tier region is Gural’s Tioga Downs, an existing racino in Nichols, Tioga County, and Traditions at the Glen in Union, Broome County. Tioga Downs is planning a minimum $90 million expansion project, including a 136-room hotel.

“I think they’re trying to overwhelm us,” said Gural of Wilmorite’s new proposal. “But the bottom line is the same: Customers are coming from existing casinos up there. And in my mind, the Southern Tier was promised a casino.”

While the owners of the Southern Tier resort Traditions at the Glen said they were interested in partnering with Tioga Downs, Gural rejected that notion. “Truthfully, I think if Traditions owner Bill Walsh won the bid, he would go broke,” said Gural. “I told him that. I don’t think that there are enough customers for both of us.”

If Tioga Downs wins the state bid, Gural says his casino would be up and running in three months.

The Walsh family, owners of Traditions at the Glen, want to build Traditions Resort & Casino, a $150 million project with 1,200 slot machines and 50 gambling tables.

Jonathan Swain, one of three principals at JNB Gaming, said the project is financed and the operators are experienced. “We’re not Penn Gaming,” Swain said. “We’re not Caesars. But we’ve done projects exactly like this.”

The Galesi Group and partner Rush Street Gaming, owner of SugarHouse in Philadelphia and Rivers Casino in Pittsburgh, want to build a $200 million casino/hotel project along the Mohawk River in Schenectady. Rochester developer David Flaum and the Chickasaw tribe of Oklahoma have submitted an application for a $150 million project in Rensselaer, in partnership with Hard Rock International. And Saratoga Harness Racing and Churchill Downs Inc. proposed a casino resort in East Greenbush.