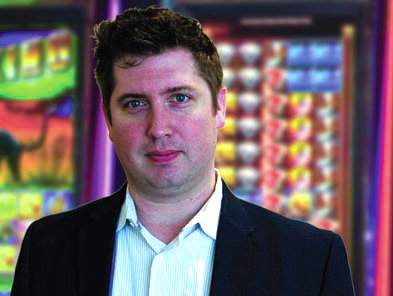 Former East Coast newspaperman Mike Trask relocated to Las Vegas during the city’s last great boom. The veteran reporter, who had worked for both ESPN and the Associated Press, joined the staff of the Las Vegas Sun in 2006, covering news, sports and entertainment.

Then the boom went bust, with the collapse of the housing market, the gaming industry and print journalism. By 2009, like many others in his field, Trask had shifted to marketing. In 2011, after working briefly as a political press secretary, he joined Bally Technologies as senior director of corporate communications. It took all his reportorial skills to learn the complicated new business. Luckily, he had some great sources.

“It was a steep hill to climb. I remember (Bally executive) Bruce Rowe walking me through a casino, explaining how it works like you’d explain it to a

7-year-old,” Trask recalls with a laugh. “He gave me a list of magazines to read and books that explained how random number generators work. I’ve saved that book and passed it on to others.”

Trask shadowed Laura Olson-Reyes, corporate communications mainstay at Bally, now at Scientific Games. “She’s extremely passionate about this industry and expects the same from anyone on her team,” Trask says. “Laura sets the bar very high.”

In January, after five years at Bally/Sci Games, Trask migrated to Ainsworth Game Technology as director of marketing. His leadership strategy, he says, is “to surround myself with people who are more talented and smarter than I am. I’m always looking for people I can learn from, and if they have more experience than I do on different levels, that’s great. I believe in putting the right people in the right positions and letting them succeed.”

He also looks for that intangible but essential trait known as passion. “Passion and a good attitude,” Trask says. “Honestly, I’ll take someone with a six skill level and a 10 in passion over someone who’s a three or four in passion with a 10 skill level.”

Since landing at Ainsworth, 34-year-old Trask has dedicated himself to rebuilding the company’s website, adding new video content and creating an app for sales forces on the road.

“It’s been fun, to build something almost from scratch with the full support of people like (Ainsworth North America President) Mike Dreitzer, Director of Sales John Glaser and Senior Vice President of Sales Kelcey Allison,” he says.

“At the end of the day, my reward is to be part of this amazing team.”