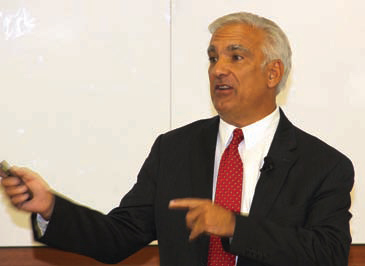 James Maida has seen it all. Before he founded Gaming Laboratories International (GLI), he was employed by the New Jersey Division of Gaming Enforcement and saw firsthand how gaming technology is always far ahead of the regulations and law, a reason for starting GLI. Speaking at the William Boyd School of Law at UNLV last month, Maida outlined a handful of technology advances that were made despite there being no basis in the law or regulations covering them.

In the early days of mechanical reels, there were a small number of reels and stops on those reels that limited the kinds of payouts that could be issued, making jackpots hard to hit. But by inventing virtual reels, the number of stops reached to the tens of millions, allowing many kinds of jackpots and results.

This also created the “near miss” feature that made players believe that almost hit a jackpot by one stop, and the wide-area progressives or the “Megabucks” style of games that would link hundreds of casinos together and allow massive jackpots. Laws and regulations were then written to account for those technology advances.

In states and regions where gaming wasn’t allowed, innovative ways around the existing laws were required. Maida recalled discussions with then-New York Governor Mario Cuomo about the ban on inserting “something of value” into a slot machine. To get around that regulation, they created cashless gaming so a card with no inherent value was used to access funds to play the machine. The system debuted at the Turning Stone casino in New York over 20 years ago.

In Indian Country, mechanical pull-tab machines were succeeded by Class II “bingo” machines that got around the restrictions on gambling devices and stuck to definitions of what kinds of games were legal. Tribes were allowed to offer pull tabs and bingo, and manufacturers devised games that used the same determination system, but on slot-like devices, said Maida.

Electronic table games were also developed to evade laws that prohibited live games but permitted slot machines in several states, said Maida. The games worked with a random number generator system and then were considered legal slot machines. Today, those games are common even in jurisdictions that permit live tables.

Maida said the message he was delivering to the law students in attendance was, “When law limits conventionality—innovate.”