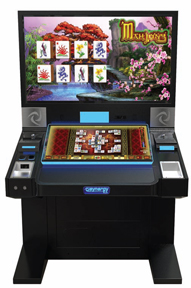 The game follows the basic mahjong standard of matching tiles, and the skill and strategy involved in matching correctly through the layout to clear the board. Matching tiles sends the player through several levels with rising bonuses, the main goal to beat the “Gold Room,” achieving the highest-level awards. Game play triggers bonus screens in which the player selects a treasure chest, a gong, urns, lanterns and koi fish statues to reveal prizes.

The game is available in the standard skill-based mahjong and a separate version based on chance. Games are available in English, Spanish, French, German and Chinese, both traditional and simplified.