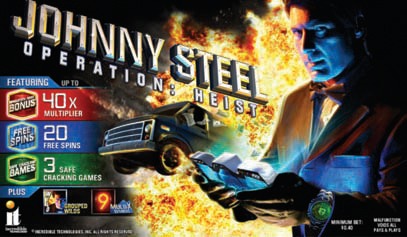 Much of the slot-machine supply sector has its roots in the amusement game business. Bally and WMS started as pinball companies; Konami was and still is a video-game giant; Aruze was a pachinko manufacturer first. The major slot-makers are replete with game designers who got their starts in companies like Sega and Nintendo.

It is no surprise, then, that Incredible Technologies, the largest U.S. manufacturer of coin-operated amusement games, is ready to tackle the casino slot market. The company, based just outside of Chicago, is best-known for one of the most successful amusement games in history, its flagship product Golden Tee Golf.

Twenty-seven years after its original introduction, Golden Tee Golf still dominates the amusement space in bars and arcades. Since its late 1980s introduction, the game, which uses gesture-control technology to allow players to go through complete golf swings on virtual fairways, has earned more money than any other arcade game in history.

The decision five years ago by Incredible Technologies executives to move into the gaming space was a natural, says Richard Ditton, co-owner and executive vice president of the company, which was founded in 1985. “We’re old-time gaming people, going back to single black screens with green graphics,” he says. “Now, people play casino games not just to win money, but to be entertained. That’s the business we’ve been in for 27 years.

“We’re normally making a zero-payback-percentage game, and we’ve been very successful in making games where the player has no chance of winning money. This is a benefit.”

“In gaming, we’re making a user interface that’s easy to understand to someone who just walks up,” adds Elaine Hodgson, president and CEO of Incredible Technologies. “We’re buying each person’s time, one coin at a time—it’s something we’re used to doing in the coin-op business; now we’re translating that to slot machines. They need to be simple, engaging and entertaining, to make that player try it the first time, and want to play it a second time, and hopefully, a hundred more times.”

Daniel Schrementi, the company’s director of gaming marketing and new media, notes that the rough treatment amusement games typically receive is another factor that prepared IT to enter gaming. “We’re building cabinets that withstand the abuse,” he says. “This is especially true with bar games. Casino games are maintained (by casino personnel); bar games are not.”

For the past few years, IT has been working on translating its acumen in amusement games to the gaming market. So far, the company has collected licenses to sell gaming machines in 12 states, including many Native American jurisdictions. Its first games are at Gaming Laboratories International for certification, and the company has secured its Nevada manufacturer’s license. IT poker games are on test now, and slot games will be on Nevada field trial by the end of the year, with a large launch in the state planned for 2013.

The company is gathering new U.S. licenses every month, and recently, the first four Incredible Technologies games were installed in Macau. Additionally, the company is ready for expansion into its home market of Illinois, as the VLT market there gets under way.

As IT’s expansion into new markets continues, the company will use the Global Gaming Expo as its coming-out party for the casino industry.

IT’s collection of games for G2E includes a wealth of in-house designs plus a few choice selections from third-party designers, notably GC2, Inc., another Chicago-area company that has designed such hits as IGT’s “Coyote Moon” and “Pharaoh’s Fortune.”

GC2 developed the first major licensed game for IT, which is launching at the trade show—“The Munsters Family Portrait.” Based on the hit 1960s series The Munsters and including a wealth of video clips and audio from the popular series about a family of monsters trying to fit into suburban America, the slot includes bonus features like “Grandpa’s Dungeon,” in which players select a favorite Munsters character to become wild during 10 free spins.

The “Free Slide Bonus” features an interactive picking award that results in credits and multipliers, and in an innovative “Slide N’ Win” feature, nine reels (three symbols each) appear across the screen, and a frame isolating five as paying reels slides across the screen, awarding repeated wins for payline combinations.

IT is launching a proprietary brand with the video slot “Johnny Steel: Operation Heist,” a game themed as a secret-agent thriller featuring mini-games involving safe-cracking, and “Multi-X” symbols that multiply symbol values for larger payouts. The safe-cracking mini-games involve picking a lock, finding a combination and cracking the safe, each for bonus wins. The bonuses involve an intricate 3D trip through several levels of a vault. “This game showcases our roots in video games,” says Schrementi.

Other proprietary releases include “Squishy Blobs,” a quirky video slot themed around various cartoon “blob” characters who dance around to a DJ in a free-spin bonus; “Sacred Stones of Alchemy,” themed on the mythical medieval science of alchemy, featuring a fifth-reel scatter symbol that transforms low-paying symbols into high-paying “silver” and “gold” symbols; and “The Herd,” in which buffalo, wild horse and wolf symbols gather into “herds” on the reels, for stacked-symbol wins.

Another GC2 contribution to IT’s collection is “Lock Down,” centered around a cartoon dog in prison stripes who escaped from a “maximum-security pound.” The bonuses are “Pick a Safe” and the “Court-Mandated Free Spin Bonus.”

This game also includes a patented feature from GC2 called “Power Line,” which is a “sticky multiplier” feature. Power Line multipliers stay in place on a payline and increase a win multiplier as long as winning line combinations land, up to a maximum of 100X.

Finally, IT is launching a follow-up to its most popular game, “Crazy Money.” In the original game, reels are set up inside a gold vault on the screen, and matching bills falling on the payline add up to jackpots totaling the face value of those bills—five $20 bills for 100 credits, for instance—multiplied by the line bet. It’s a method the company calls “ClearWin.”

In the sequel, called “Crazy Money Millionaire,” a millionaire character in a balloon is added to the screen—he floats over the reels and throws free spins and wild symbols down for base-game mystery bonuses. A second-screen bonus called “Crazy Money World Tour” invites the player to spin a wheel to decide where in the world the millionaire’s balloon will land. Depending on the location on which the wheel lands, 50 “gift certificates” may be awarded for the trip. These are stuffed with free spins and added wild symbols for a free-spin bonus round.

The bonus in this one, called “Scratch Master DJ,” presents a record on a turntable, and gives the player a chance to play DJ, “scratching” out a rhythm on the disc while hip-hop music plays and fans dance. The bonus game offers up 60 scratches of the vinyl for bonus prizes of up to 3,000 credits.

In addition to the traditional casino games, IT will display a lineup of games designed for the Illinois bar VLT market. The Magic Touch Illinois VGT collection, featuring “Golden Tee Wild!,” will be on display for Illinois route gaming operators.

The company also will show new titles for the Magic Touch Asia collection, designed for the Macau market. “Part of our expansion plan is to take our games and localize them to the Macau market,” says Ditton. “We have a partner in Macau who advises on what to include—for example, auto-play, and the ability to insert money while a game is in progress.”

In addition to slot games, IT will show some innovative twists on video poker and keno games, designed for the Magic Touch multi-game machine.

Thirty-one different versions of video poker have features such as a “Perfect Play” option, configurable by the casino. Should the operator decide to activate it, the Perfect Play option shows the player what the proper strategy on each hand would have been, after the discard has been made—a tutorial on expert video poker play built into the slot machine.

Another option on the video poker games offers a “Pro Tip.” After a player has won six hands, he can ask for a Pro Tip if he’s unsure which cards to hold on a hand. There also is a “Player’s Score” included in the video poker program that logs hands per hour, the odds of each hand happening, and a score showing how well a player has done against perfect strategy.

The company’s keno games are all presented in 3D, showing balls dropping onto a horizontally positioned board. Options range from a one-card game (“faster than any other keno game out there,” says Ditton) to a 26-card game.

Hodgson says the appeal of IT’s games lies in the company’s willingness to take risks in game design. “What has done well for us is marrying popular features with daring and different concepts,” she says. “We do things other manufacturers probably wouldn’t be willing to do, because it’s who we are, and it’s part of our culture.

“For success, players have to pick your game out of the thousands in a casino. We’re doing what we can to accomplish that.”