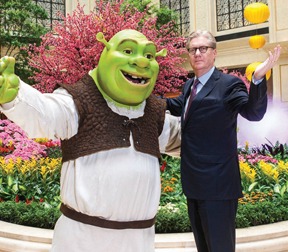 Ed Tracy’s roots go back far in the gaming industry. As the leader of the Trump organization in Atlantic City in the mid-1990s, he helped right the ship after the first bankruptcy grounded Trump Taj Mahal. Later, he was at the forefront of the riverboat gaming industry, leading Capital Gaming as it developed a casino in New Orleans. As an adviser and consultant, he helped identify gaming opportunities for his clients as the industry expanded rapidly.

But it wasn’t until he was tapped by Las Vegas Sands to take over its floundering Macau operation that Tracy’s talents came to the front.

At the time he joined the LVS subsidiary Sands China, he followed a messy departure of the previous president. Funds were short to complete the adjacent Sands Cotai Central, and relations with the government were difficult. Tracy said he had to get down to business quickly, but first had to understand how it operated.

“The size and scope was daunting,” he says. “More than 9,200 hotel rooms, 600 retail outlets, many entertainment businesses. It was a very complicated, complex business.”

He also was surprised by the oversight of the company.

“The amount of regulators we had was also an issue,” he explains. “We’re a Hong Kong-listed company regulated by the U.S. and all the gaming jurisdictions in which we operate. So it’s a huge business with a lot of people and a big constituency. Getting used to that took some time, and I was lucky that Mike (Leven, LVS president) gave me 90 days to present a plan to him and the board to move forward.”

Whatever he did worked. Sands China has been soaring ever since. Under Tracy’s watch, the three hotels and two casinos of Sands Cotai Central opened smoothly and the complex today operates like a well-oiled machine. Sands China has largely avoided the labor strife impacting some of the other operators. But dark clouds have been hanging over Macau for the past year. Declining revenues have sent share prices of the companies plunging, and the VIP segment has cratered.

Tracy says he’s not so concerned with the VIP weakness.

“We are the least dependent upon the VIP market of all the operators in Macau because we’re built to serve this growing middle class in China,” he says. “I don’t see any road signs telling me it’s going to improve anytime next year. It could be that conspicuous consumption will continue to be frowned upon by the central government, whether you are a VIP or just a big bettor in the premium mass segment. None of them want to be pigeonholed as a conspicuous consumer in China right now. So it’s very hard to predict, but we will be the least impacted by that. We’ve shifted a lot of our resources away from VIP into the mass market, where there is potential for further growth.”

The good news, says Tracy, will be the opening of many new properties in Cotai over the next four years. While that might seem to just increase the competition, Tracy says there is reason to believe that it will simply increase the demand.

“If you look at history,” he says, “supply has always spurred demand in this market. When we opened Sands Cotai Central, not only did we fill it up quickly, but everyone experienced growth in the marketplace. I believe the history will continue to demonstrate that because the penetration in China is so low. It’s only 2 percent overall and only 8 percent in our close-in market. So we’ll see capacity drive demand.”

And it’s getting easier to get to Macau, he points out.

“We’re also very lucky that the central government of China has provided us with amazing improvements to the transportation infrastructure,” says Tracy. “It delivers people directly to the Pearl River Delta, where Macau is one of the destinations. The advent of high-speed rail, the highway systems, regional airport expansions and the bridge that is going to connect Macau and Hong Kong all bode very well for the future of our city, and have positioned us for success in the future.”

Still, with all the glittering new properties—every operator in Macau will be introducing a new resort during this time—existing operations need to keep pace.

“We’re making sure that obsolescence doesn’t become a reason to go somewhere else,” Tracy says. “The support of Mr. Adelson with capital reinvestment is a very important piece of our puzzle. We have the best ‘bones’ in the business, but you constantly have to update and modernize. We bring value-added entertainment and dining options to the table, so from a product standpoint we feel very comfortable with our position in the market.

“We’re preparing every way we can to ensure that our product is differentiated and stays fresh and interesting in the mind of the consumer. We’re continuing to use entertainment to drive the mass market.”

With more competition, however, more pressure on an already tight labor market is going to be added. Tracy says Sands China is going to continue to do what they’ve successfully done to attract and retain employees.

“We currently have 28,000 team members and we listen intently to them,” he says. “We do a very good job of addressing the needs and desires of our workforce. A lot of that falls into providing academic, training and advancement opportunities. Being the biggest operator, we have more opportunity for advancement. With the upcoming openings of our new properties, the Parisian in ’16 and the St. Regis in ’17, we feel pretty comfortable that our ability to recruit will remain strong.

“When we were recruiting for Sands Cotai Central, we targeted the communities with outreach and educational programs, explaining the diverse kinds of jobs that were available. And again, as the largest company, we have a wide selection of jobs: entertainment, software or hardware, retail… We have all those kinds of businesses.”