Reasons for the recent downturn in Macau 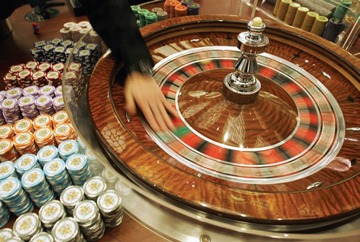 Given the nature of China’s political system, and how people behave within its framework, it is not surprising that VIP growth fell off a cliff in spring 2014. On an almost overnight basis, a notable segment of the VIP customer base self-selected themselves out of the market, as they would have deemed their continued presence in Macau to not be worth the risk. Based on GGR data over the course of 2014, it seems to us that the run-rate decline of 20 percent to 30 percent was primarily attributable to those individuals who stopped coming.

The anti-corruption crackdown had the effect of causing some junket investors to similarly pull money out of the system. In

addition, and either due to real financial distress or just taking advantage of a bad situation, some number of VIP customers slow-paid the junkets on losses, which (at least temporarily) took money out of the system.

All three of these issues resulted in liquidity leaving the system, which in turn would have slowed down the velocity of money in the system and resulted in lower rolling chip volumes. In addition, we believe that ongoing junket M&A likely caused some junkets to operate more conservatively than normal, which also had a negative impact on volume.

3. Hong Kong protests—perhaps the most under-appreciated factor driving GGR down

The Hong Kong protests resulted in some number of persons either explicitly excluded from visiting (e.g., those traveling as part of a tour group to Hong Kong or a joint trip to both Hong Kong and Macau) or resulting in some incremental segments of the premium-mass and VIP populations self-selecting themselves out of the market due to incremental political considerations. Quite simply, we think the whole region simply became “too hot” given the exceptionally sensitive political ramifications of the Hong Kong protests (which, we believe, is tough for some Western investors to digest), and as a result a number of people—who heretofore did not feel like they were at risk due to the broader anti-corruption crackdown—suddenly stopped coming.

In late October, one U.S.-based operator instructed its junkets that proxy betting (placing bets via telephone) would no longer be allowed. We believe this was followed soon after by a market-wide directive that all such wagering must stop.

Given the difficulty of enforcement, we believe that some amount of proxy betting is likely still occurring, although a fair amount has probably stopped.

Like the Hong Kong protests, we believe the broader economic slowdown in China was the only other factor over the course of 2014 that likely impacted all three primary customer segments. While we would defer to professional economists in terms of any outlook on greater China, we would note that such actions like the November rate cut by the People’s Bank of China (the first rate cut in more than two years) should result in greater liquidity in the system, which ultimately should have a positive impact on VIP and other high-net-worth customers.

There were two rounds of transit visa scares in 2014. An initial restriction on transit visa usage occurred on July 1, and made it marginally more cumbersome to use this method to enter Macau (in effect it forced persons to actually fly to a third-party country or risk being locked out of Macau for two months). We believe this action had the greatest impact on junket agents rather than on any of the three primary customer segments. Based on conversations we had with VIP operators, some agents were avoiding Macau and taking their customers to other jurisdictions (Korea, Philippines, etc.) as a result.

We believe there is a material disconnect between reported visitation and trends on the ground. Total visitation was reported to be up 8 percent YTD through November, including 11-plus percent in October and plus-15 percent in November for visitors from all sources, and visitation from China plus-20 percent and 28 percent in October and November. As such, we believe the supposed decline in spend per visitor is much less meaningful than the simple math of GGR divided by the number of visitors would suggest. Clearly, spend per visitor has materially declined at the VIP level (as some of the big guys have stopped coming and therefore have skewed the numbers), but we believe the decline in spend per visitor at the mass level is much more benign.

As part of its stepped-up anti-corruption campaign, we believe that the government is taking a harder stand on various financial issues, including anti-money laundering.

In addition, certain parties involved in the VIP business will now have to submit to background checks to prove that they have a clean (crime-free) background. We believe that nearly all of those involved do have clean backgrounds, and likely only a handful of persons are truly at risk from being precluded from taking part in the VIP business.

In the weeks and months leading up to President Xi Jinping’s visit to Macau in late December, a handful of high-level PRC officials provided commentary on such things as Macau’s need to diversify itself, and that gambling on the part of government officials is a bad thing. Any and all such commentary was met with further negative pressure on shares. We would counter that the call for Macau to diversify is nothing new, and has been sounded time and again by government officials (and is a primary driver of all the non-gaming elements associated with the next wave of development in Macau). In addition, the negative commentary on overseas gambling was not targeted, in our view, at Macau, but primarily at Korea and other regional destinations that have seemingly preyed on Chinese customers in extra-legal ways. But, the reality is that these comments were bad at an especially sensitive point in time, and have been viewed by many as yet another reason to stay negative on Macau.

Macau’s 11th-hour expanded smoking ban in early October drove already-low sentiment even lower. Instead of only banning smoking in all non-premium mass and slot areas, the government extended the ban to encompass all parts of the casino floor other than VIP. Subsequent to this action, many operators have reclassified premium mass as VIP, which seems to be mitigating any impact. The smoking ban has had a negative impact on both grind mass and slot machines, with slot machines paying a higher price.