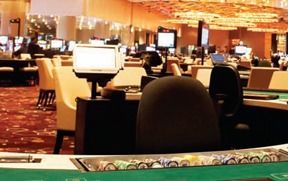 From the gaming industry’s perspective, perhaps the saving grace of Macau’s declining revenue is that it is largely self-inflicted. Not on the operators’ part, but in that man has brought this upon himself. In other words, the government’s anti-corruption campaign, smoking ban and other contributing factors referened in this special report do not undermine the long-term viability of the market.

However, the effort to bring earnings back to previous highs falls on the operators’ shoulders. They’ve focused on mass-market play for some time now, driven by higher margins. A major factor contributing to those margins is that mass-market play does not require commissions, which are approximately 40 percent of VIP revenue. This implies that a recovery in earnings does not require a recovery in revenue or its VIP component, an important point that may be lost on the broader stock market and its current disposition to sell operators’ stocks.

The decline in revenue observed in the first half of 2014 was largely due to the crackdown on corruption being undertaken in mainland China. The decline, while substantial, was largely limited to VIP revenue. The overall impact was significant because VIP revenue was about two-thirds of total revenue going into 2014. This was down from about 73 percent in 2011, largely due to growth in China’s middle class and the industry’s marketing efforts targeting this segment.

A second factor contributed to a decline in revenue during 2014 as well. On October 6 of last year, the smoking ban on main casino floors was implemented. In the final quarter of the year, both mass-market tables and slot machine revenue declined by approximately 16.5 percent. The decline in VIP revenue also accelerated, although there was not yet a smoking ban in VIP gaming rooms. Smoking restrictions are currently being considered for VIP rooms.

Another factor that may have contributed to the decline is consumer sentiment and concerns about the Chinese economy. It’s important to note that this is a large and underpenetrated market with a rapidly expanding economy, so this final factor may not be a large contributor to the observed declines shown in the table below.

The independent impacts of the efforts to abolish corruption and smoking ban are difficult to identify. Smoking bans regularly have impacts ranging from about 7 percent (Holland in 2009) to approximately 20 percent (New South Wales in 2007-2008) with many in the 12 percent-to-15 percent range over the first year. While there may have been a small decline in demand based on economic uncertainty, for the purposes of this exercise we will attribute the recent decline in mass-market tables and slots to the smoking ban. The impacts of smoking bans typically seem to work themselves out over two to three years, and we’ll assume the same for Macau.

It’s important to note that the Chinese economy continues to expand rapidly. It’s the envy of many Western markets, where 7 percent growth would be welcome. While the economy may have its challenges, we assume that strict controls and oversight will support strong growth. (For example, decoupling the renminbi’s unoffical peg to the rising U.S. dollar would stimulate subsantial growth.)

The current expansions on Cotai targeting mass-market play will add the capacity necessary to facilitate greater visitation, including hotel rooms, restaurants and other amenities that enhance the visitor experience. An increase in table games beyond the cap also will be critical to expanded mass-market visitation. The increase will bring in more mass-market players and help to diversify revenue streams, so hopefully, the government will permit the expansion.

Coupled with continued infrastructure improvements, visitation to Macau should be able to grow. There is a chance for further constraints on growth, such as limiting visas, and those constraints could undermine these estimates.

So how much mass-market demand will exist in the coming years? The number of affluent households in urban areas of China is expected to increase from 11.4 million today to 19.7 million in 2020, an increase of 73 percent. These households don’t likely map exactly one-for-one to VIP guests, but it’s a fair estimate.

The number of upper-income households in urban areas is expected to grow from 44.3 million to 167.2 million, an incredible increase of 278 percent. This equates to a compounded annual growth rate of 27 percent. Some of these households are in the top 10 percent based on income, but overall they will make up the bulk of the middle class and 51 percent of all households.

These households are a reasonable indicator for mass-market play. Low- to middle-income households in urban areas are expected to shrink to 118 million, and poor households to shrink even more dramatically.

In short, and when combined with other developing countries such as India, we are witnessing the most dramatic economic migration in history. Assuming the government’s efforts to improve social services and encourage greater consumption are successful, we will continue to see an amazing shift in China’s economy and consumption.

With a low cost of living, growth in disposable incomes will drive growth in consumption, and the growing middle class will purchase goods and services including increased discretionary spending on things like entertainment and gaming.

In other markets, approximately two years have passed for gaming revenue to return back to levels witnessed prior to a smoking ban. This implies that revenue would return to 2013 levels (the year prior to the smoking ban) in the last quarter of 2016. After that point, the analysis assumes growth based on recent historical levels for slot win and 20 percent for mass-market table play.

This discount to the 27 percent growth forecasted for upper-income households was made in an effort to be conservative. It is possible that growth exceeds this level for a number of reasons. These include the opening of more properties on Cotai and the likelihood of some VIP players moving toward the premium mass segment due to the crackdown.

For this exercise, a 40 percent decline in VIP revenue was assumed in 2015. While the decline may seem excessive, it is consistent with what little data we have available for 2015 at this point, as well as the statements made by public officials and several analysts’ estimates. Thereafter it is assumed that VIP revenue will grow at 5 percent annually over the forecasted period. This is well below all but the gloomiest of forecasts for GDP to account for the potentially slow uptake in play following a concerted effort by the government.

These assumptions drive an estimated gross gaming revenue of nearly 310 billion pacatas in late 2017 or 2018, with mass-market play on slots and tables comprising approximately 55 percent of the total. While this estimate falls short of 2013’s 361 billion pacatas, the greater profitability of the mass-market segments is expected to lead to a similar earnings level. This assumes that casinos can shift operating strategies and efficiently serve the mass market.

So, what other critical elements could shift this estimated recovery in earnings? First and foremost has to be further government intervention. For example, initiatives to curb visitation or implement smoking bans in VIP rooms would impact these estimates. Next, a significant decline in the Chinese economy could impact these growth assumptions, and would likely lead to slower growth. Even slowed growth may lead to a decline in consumer sentiment. If additions to supply or infrastructure improvements were not to continue, it would likely be difficult to facilitate a large influx of mass-market visitors.

Operators currently skewed toward the mass market are best positioned to weather this storm over the near term. Las Vegas Sands’ extensive Cotai operations are among the most diversified, successfully attracting mass-market play and earning the lion’s share of non-gaming expenditures in Macau. In addition, Galaxy and Melco Crown have existing facilities targeting mass-market play on Cotai, and additional supply opening this year that should help them maintain profitability.

As these and Macau’s other three operators open new properties on Cotai, the market will evolve. These openings should be well-timed with the continued growth in the mass market. Market share and earnings would probably shift over this time period and likely lead to a return of the lost market capitalization attributable to the recent decline in Macau-centric stocks.

With many trading at approximately 50 percent of their value one year ago, picking out those that will benefit from the newly forming market could make you a winner.