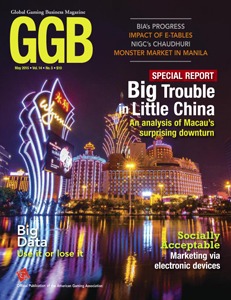 Three years ago it would have been unthinkable. The rapid, prolonged and steep decline of gaming revenue in Macau has surprised everyone involved. Casino executives there have always acted on the “build it and they will come” principle. After all, Macau had only just begun to scratch the surface of the Chinese market with a penetration of less than 2 percent. Sure, there had been some bumps in the road when the government would restrict travel visas or crack down on China Pay, the ubiquitous national credit card, but they always loosened up.

Analysts and officials are clear: the gritty gaming capital of Asia needs to extend its attraction beyond just casinos. Rooms, food, entertainment, shopping… All need to be part of the solution. But with an image more like Atlantic City than Las Vegas, Macau has had trouble convincing the mass market that there is more than just gambling.

So the crackdown on corruption in China has had a seriously negative impact on the Chinese “Special Administrative Region.” And with an explosion of huge new resorts in the Cotai section of the city poised to open, continuing confusion about the government’s (both Macau and China) attitude toward gaming, and rising competition from other Asian jurisdictions, the uncertainty of the city’s future lies heavy on the balance sheet of the casino operators.

David Bain, the principal gaming analyst for Sterne Agee, believes the corruption crackdown is the principal reason for the Macau slump.

Grant Govertsen, the Macau-based analyst for Union Gaming Group, says there are many reasons for the slump, but “we believe the biggest driver of the decline in GGR in Macau is that behaviors have changed dramatically owing to political considerations, namely the anti-corruption drive which has resulted in a large number of players self-selecting themselves out of the market.”

Hardest hit has been the lucrative VIP market, which until recently comprised 70 percent of gaming revenues. Private businessmen, public officials and “connected” individuals who were courted by junket operators suddenly lost their taste for gambling if it meant maintaining a high profile in a suddenly risk-averse society.

“Those with strong financial resources feel Macau is a risky travel destination,” says Bain. “The anti-corruption campaign does not just transcend to Macau; some mainland contacts cite entrepreneurs even taking their personal names off restaurants to keep a low profile in the current climate. This is often viewed in China as an ‘anti-extravagance’ campaign. It is damaging to the VIP and high-end premium mass wagering in Macau.”

Junket operators who once had a sweetheart deal with Macau regulators have come under greater scrutiny, and many have fled the market. Fancy rooms built specifically for these operations stand vacant in many Macau casinos.

The premium mass market, the potentially more lucrative business targeted by the new Cotai resort, has also shrunk as participants in that segment also seek to stay under the government’s radar.

But the vaunted non-gaming attractions in Macau have also failed to achieve the traction necessary to bring in the groups, tours and conventions that will decrease the resort’s dependence on gaming.

While many of the world’s most prestigious brands have outlets in Macau, catering to status-conscious Chinese, shopping has been something of a disappointment. Ditto the convention business, despite a dearth of meeting space in neighboring Hong Kong. Entertainment has been hit or miss ever since the opening of Sands Macau, which quickly closed its showroom after opening in 2003.

The development of nearby Hengqin Island has stuttered. Promised theme parks, luxury resorts and educational facilities have been slow to come to fruition, even though several casino operators have pledged to build non-gaming resorts there.

Chui called it the “new normal” in Macau. The city is under orders from Beijing to eliminate graft and corruption by high rollers, and to diversify its economy beyond gaming, which has historically been responsible for up to 80 percent of government revenues.

Chui said the government will look at eight factors during a midterm review of the Macau economy, which will include a strategy for renewal of gaming licenses that will begin in 2020. They include the impact of a resort on the local economy, the impact on the local job market, the “interaction between the gaming and non-gaming sections of the gaming industry,” the level of adherence to their gaming contracts, the business’s corporate responsibility and the overall success of the business.

Chui said he is “cautiously optimistic” about the future of the industry. “Why have I said that we are optimistic about the gaming industry? The main reasons are huge development projects in Cotai, due to be completed on schedule, (and) the number of visitors continues growing. In 2014, there were a recorded 31.5 million visitors.

New product has always driven visitation to Macau, and so, will the flurry of openings of new resorts that will commence this month with the launch of phase 2 of Galaxy Macau be enough to stem the revenue decline? A lot depends on the allocation of table games to each property. The growth formula outlined by the government several years ago doesn’t seem to accommodate all the new casino space. But even if it does, will there be enough qualified workers to staff the games, since the government demands jobs be held by native Macau residents?

“The figures show that the city’s tourism and gaming industries are still competitive and they are already equipped to face the challenges ahead… We are optimistic about and confident in their development,” Chui said.

Is the crackdown in Macau forcing Chinese gamblers to get their fix away from the prying eyes of public officials? The jury is still out on that.

“There is evidence that Chinese VIPs are increasing travel to other regions to gamble,” says Bain. “We have seen an impact primarily with the Philippines to date. However, these types of territories are nowhere near the scale of Macau. They do not have the same critical mass, infrastructure, cultural and language similarities that Chinese visitors to Macau have come to enjoy. We do not expect a small trend to new country gaming alternatives, such as the Philippines, to be overly disruptive for Macau gross gaming revenue over time.

“Junkets play a role in travel and hotel arrangements, and credit extension in particular, at venues where it is legal (not Singapore, etc.). Our contacts also suggest junkets have conducted an increased amount of phone wagering in the Philippines from China, though it is small, as many Chinese players are slow to trust the Philippine phone gaming system over Macau at this point.”

Govertsen says gamblers seem to be laying low at this point.

“As we speak with junket operators, we get the sense that the desire to gamble has not declined within their customer base. However, a very large number of these customers are sitting on the sidelines entirely and are not willing to gamble anywhere these days. A smaller subset seems willing to travel overseas to gamble, including such destinations as the Philippines, Cambodia, Australia, Korea, etc.”

According to Galaxy Deputy Chairman Francis Lui, the new products will create new interest in the market.

“I believe we will gradually see a recovery in the second half of this year; I’m not worried about whether there is any massive structural problem,” Lui said, after Galaxy earnings plunged 25 percent in the fourth quarter. He said the company “won’t change its long-term business strategy in the midst of business cycles.

“Our investment is trying to provide a full range of choices for the people going to Macau,” Lui added. “In the past, resorts would only focus on the gaming aspect, but now the resorts will be more a destination for holidays that is not only for gaming. We are moving into a new era.”