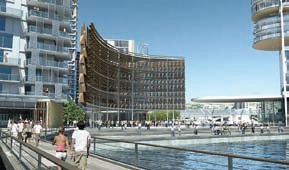 James Packer’s Crown Limited has concluded a deal to develop a luxury hotel and casino in the Barangaroo district on Sydney Harbour as part of the company’s push to build a global brand in the VIP gaming market and attract more Asian high-rollers. There’s one problem. Echo Entertainment, owner of the city’s Star casino, holds an exclusive casino license in Sydney until 2019. So, to succeed at the Barangaroo site, Crown either needs to convince Echo to share its license, perhaps in a joint venture, or convince the New South Wales government to issue a second license.

Crown has some leverage in this regard. The operator of Crown Melbourne casino and Crown Burswood in Perth holds a 10 percent stake in Echo and has applied to NSW regulators to increase it to 25 percent. The company also led a successful push to oust Echo’s previous Chairman John Story and replace him with its own pick, John O’Neill.

“We favor using Echo’s license,” Crown Chief Executive Rowen Craigie recently told analysts. “We will see if (O’Neill) is of a similar mind. The economics of building a luxury hotel in Australia is just not good without cross-subsidization from gaming.”

“Ultimately some sort of deal will be struck, more likely on the sharing of the license,” said one analyst.

It could get complicated, though. Malaysian resort conglomerate Genting, owner of Singapore’s Resorts World Sentosa, has also taken a 10 percent stake in Echo. Packer is reported to be open to an alliance with Genting, but it is not clear how that would play out.

Crown, meanwhile, is seen as unlikely to make a full bid to take over Echo because it would financially stretch its balance sheet, already under pressure from major expansion programs in Melbourne and Perth before any development starts in Sydney.

The company now is looking to borrow A$400 million in the form of unsecured, subordinated notes redeemable after 2018, according to a regulatory filing. Crown expects credit ratings firms will treat part of the proceeds from the offer as equity, bolstering its balance sheet.