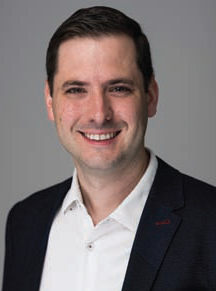 Stewart Baker didn’t set out to use his skills in finance in an industry devoted to casino gaming.

“I landed here by accident,” says Baker, who grew up in the East Midlands of the U.K. One of his employees left to work for Inspired Entertainment and the two stayed in touch. When a financial controller position opened up, his former co-worker suggested Baker apply.

“I’m very glad I did,” he says. “I enjoy the industry, although it’s not without its challenges. Perception and attitude in the U.K. is a challenge, as we have seen with the relatively recent changes in staking levels on the high street.”

In April 2019 the government reduced the maximum stake from £100 a spin to £2 on casino-type games. Slots remained the same at £2.

As chief financial officer, Baker, who earned a degree in economics from the University of Sheffield in 2005, oversees the financial end of Inspired. He covers accounts receivable and payable, quarterly reporting, budgeting and forecasting and taxes. He also heads up business services, which includes functions that don’t easily fit anywhere else. Facilities, for example. And insurance and travel expenses.

“I spend longer than I ever thought possible talking about car parking and air conditioning,” he says. “I enjoy this side as it’s not what I’ve been used to. I’m lucky enough to lead a great team of people, which given our recent acquisition has roughly doubled in size. Inspired recently acquired part of the Novomatic U.K. business.”

Baker admits luck played a role on his occupational development at such a young age. “I wouldn’t say that I have any magic solutions here, but I live by the mantra of Work Hard, Work Smart and Work Together.”

“I’m sure people have often looked at me and thought, ‘what does this kid know?’ But I’d like to think I can prove that I know something,” he laughs.

Baker has had some great mentors in different organizations such as Deloitte and Experian. “At my previous employer, I wanted to toughen up, to be able to stand up better to various requests, particularly from those outside of finance, so I tracked down the individual with the reputation for, shall we politely say, the bluntest tongue,” Baker says.

He’s grateful to former CEO Luke Alvarez, who took a real chance on Baker when he asked him to be CFO.

“He taught me life is much more interesting and challenging when you don’t already know you can achieve something,” says Baker. “Then in more recent times, working with Brooks Pierce and Lorne Weil has been great because I was able to draw on their years of experience.”

Baker admits he is not someone who plots out his next position. “I’ve always put my head down and worked hard, giving as much as possible, and this has opened up doors. That said, I’m in no hurry to leave Inspired. It’s an interesting place with a variety of challenges,” says Baker, who spends as much time as possible with his family in East Midlands, which includes a 4-year-old son.

He urges those with a desire to enter the industry to talk a lot of people first. “Get a sense of what it’s really like—as reality is probably very different from perception,” Baker says.