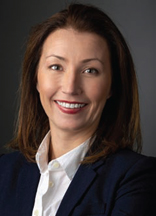 Born in Ireland, Lane moved to the U.S. as a young girl and attended Pennsylvania State University, where she earned a bachelor of science in marketing and international business. Her first job was at an ad agency focused on marketing strategy and advertising for CPG companies, and she settled in Pennsylvania with her husband, but in 2007, his job brought him to Las Vegas. Lane quickly found a home as a marketing specialist at Aristocrat. “I really stumbled across this company,” Siobhan says, describing her entry-level role.

Asked about her career arc, she describes moving to Las Vegas immediately before the recession hit. “It was a really interesting time when I joined,” Lane says, noting not only the recession and the real estate market, but also Aristocrat coming off high growth in the early 2000s. They had a new CEO and management team formulating strategies to carry Aristocrat forward.

When describing her ascension through the ranks, she cites a mix of luck, hard work and great mentors. “There was a lot of right time, right place,” Lane says. “A steep learning curve, but I paid attention, listened, learned quickly, soaked in the information, and developed my network,” helping her become a key part of Aristocrat’s success story.

As for mentors and managers, Lane recalls, “I had a lot of really great managers who are now key leaders on the supplier side… Aristocrat as an organization does a really great job developing its people and presenting them with opportunities to grow.”

She specifically mentions four mentors who played a significant role in her development: Matt Wilson, managing director, Americas at Aristocrat; Mitchell Bowen, managing director, Australia, New Zealand and international at Aristocrat; Dallas Orchard, now senior VP and chief product officer-gaming at IGT; and Toni Korsanos, who until recently was the Global CFO at Aristocrat. Lane says Korsanos’ guidance was invaluable, “especially as a young female working my way through a male-dominated industry.”

Asked about young grads, Lane says, “It’s hard to think of yourself as someone who qualifies as a mentor, but I try to pay that (which I received from Toni and others) forward, to both females and males. But I remember how it felt, and at that time there weren’t as many females in higher-level positions.”

She notes the opportunities in gaming also: “I think this industry is really great for career advancement. I look around at my peers and people I’ve worked for. You can advance at quite a young age if you’re talented and hard-working, and my advice would be to really embrace that.”

When the discussion turned to life out of work, Lane mentioned that she’s a dedicated mom (6-year-old twins and a 2-year-old) and wife first and foremost.

“It brings me great joy, but it doesn’t leave me a lot of free time,” she says, laughing.

When not hanging out with her family, Lane works with Alex’s Lemonade Stand Foundation, a national childhood cancer research foundation.

“It’s something I’m really passionate about,” Lane shares. And her passion is a family affair. Lane works on generating awareness and fundraising, and her husband, Eric, serves on the board.