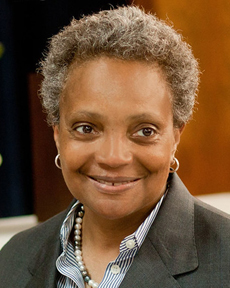 In the early 1990s, a young attorney named Lori Lightfoot was part of a blue-ribbon panel exploring the benefits of a casino in Chicago. “That was almost 30 years ago,” yet the project is still in the planning stages, says Lightfoot, now mayor of the Windy City.

A 2019 plan by Governor J.B. Pritzker included an effective tax rate of 72 percent, which drove off investors. Lightfoot campaigned for a lower tax rate (now about 40 percent), and in December, 11 companies responded to the city’s request for information, including MGM Resorts International, Wynn Resorts, Illinois-based Rush Street Gaming and Hard Rock International. Lightfoot is determined to move the project forward and get shovels in the ground.

Lightfoot spoke with GGB Managing Editor Marjorie Preston at a March press conference announcing the next step in the process, a request for proposals.

GGB: Several Chicago mayors before you also wanted to bring a casino to the city. How did you get it this close to the finish line?

Lori Lightfoot: Mayor (Richard) Daley tried to muster a lot of political support for a Chicago casino that unfortunately didn’t come to fruition during his tenure. Mayor (Rahm) Emmanuel was a little more agnostic. But I really saw the potential for tremendous opportunity. Obviously, the revenue will be tied to shoring up pensions, which is desperately needed. But we’re thinking broadly about a real entertainment district. This could have such a catalytic effect on the economy of our city.

Believe me, I worked the phones, I really pitched folks to get this over the threshold. I certainly expended my own personal political capital, because I knew how important it was.

Other casinos in major metro areas—Detroit, Baltimore, New Orleans—have been less successful than anticipated. Why will Chicago be different?

Number one, we have an incredibly diverse and robust economy that’s different from almost every other city in the country. Year after year, we’re identified as one of the key destination points for tourists from across the country and the world. That gives us a head start.

Chicago is a world-class city at the crossroads of a lot of different intersections—within a five-hour drive of a lot of destination points in the Midwest and Upper Midwest, the heartland and the border states. Chicago is a fertile ground (with) a built-in class of customers. We’re not generating that from scratch; we already have it, and this will just amplify existing strengths.

A Chicago casino has been a long, long time coming.

What non-gaming amenities are you looking for? A luxury hotel? Pools and spas? Meetings and convention space? Entertainment?

If you look at casinos that have come online in the last 10 years, the ones that have been really successful aren’t just a box; they’re really the whole package. We’ve followed the shifting change of their revenue streams, and particularly in Las Vegas, there’s a significant amount of revenue generated by the ancillary businesses—whether it’s a singer who does a residency or a hotel and restaurants. It’s not just people putting coins in a machine or gathered around a table. Gaming has evolved significantly over the last few decades, and we want to take full advantage of that trend.

Do you have one location that you favor over others?

Well, I have some ideas about where we can maximize the opportunity, but we’re going to give flexibility to the developers to pitch us on where they think would be the greatest opportunity.

Some big names have expressed interest in the project. Do you have a personal preference?

We’re not putting our thumb on the scale for anyone. We want someone who really shares our vision about how great an opportunity this is, who is going to think about this not just as building or a box but part of a very exciting entertainment complex.

The bottom line for us—we want to set up the chosen operator for success, and we’re committed to partnering in a way that makes that happen.

Watch Chicago Mayor Lori Lightfoot in a Request for Proposal (RFP) for the opportunity to apply for the sole casino license in the country’s third-largest metropolitan market.