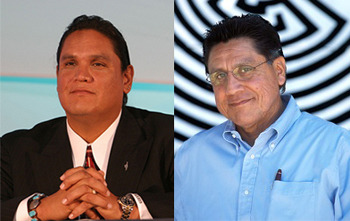 The annual conference and trade show of the National Indian Gaming Association always includes an annual meeting of members, who vote on issues and elect board members. Every two years, an election is held for the chairman of NIGA. For the past several cycles, current Chairman Ernest Stevens Jr. has been re-elected by acclamation.

This year, however, during a time of great importance in Indian Country and for tribal gaming, Stevens is being challenged by Ivan Makil, a former tribal leader from Arizona, who has gathered support from some of NIGA’s most important members. The election is shaping up as being very competitive as Stevens retains significant support from his base.

The two will face off in Phoenix in early April and have spent the weeks prior to the meeting shoring up support in what could be a very competitive race. At issue are what many consider the most important two years for Indian Country in Washington, D.C., in many years. With the initiatives taken by the Obama administration, many tribal leaders see a golden opportunity to further Native American causes.

Stevens has led NIGA for the past 10 years, succeeding a man who he considers his mentor, Rick Hill. Both Stevens and Hill are members of the Wisconsin Oneida Nation. Stevens served as a tribal councilman with the Oneidas prior to joining NIGA.

During his time, Stevens’ NIGA has established many milestones. He notes that his proudest achievements are the defense of the Indian Gaming Regulatory Act, consensus and coalition building in Indian Country, the empowerment of tribal leaders through government-to-government consultations with the U.S. Congress, and the establishment of NIGA’s Annual Legislative Summits.

Both candidates believe that the next two years under the Obama administration are very important.

“I think it’s critical,” says Makil. “This administration has provided an opportunity for tribes to begin to shape their own national agenda. It’s one of those times that we have to really come together, and I hope it’s not a missed opportunity.”

Stevens believes that there is much to be accomplished during this time.

“These next two years are important because too many of our people still need help,” he says. “The national economy is just pulling out of the most devastating financial crisis since the Great Depression, and the national unemployment rate continues to hover around 9 percent to 10 percent.

“Now compare that to the Indian Country economy, which has suffered average unemployment rates of 50 percent for decades. Poverty rates exceed 25 percent. So if Congress is going to focus the next two years on economic recovery and job creation, all of Indian Country must be a part of that solution.”

The loss of many friends of Indian Country in the next two years makes it even more crucial to get things done, say the candidates.

“It’s always sad to see champions of Indian Country move on,” says Stevens. “Last year, we saw the departure of Senator Byron Dorgan of North Dakota. All of Indian Country will truly miss his tenacity and advocacy. But we’re prepared to work with the National Congress of American Indians and other tribal organizations to educate the new members of Congress about tribal issues.”

This year, Senators Akaka (D-Hawaii), Kyl (R-Arizona), Bingaman (D-New Mexico) and Conrad (D-North Dakota) announced that they are not seeking re-election. And again, Indian Country will miss their advocacy. But senators and congressmen have come and gone for decades, and Indian Country has always survived.”

Makil notes their departures but says it’s another opportunity for tribes.

“There is always that challenge for tribes no matter who is in office,” he says. “Tribes have to remember to be non-partisan. Every time there are new officials in office there’s a process of educating them about our issues. I haven’t seen that change. It’s always a challenge for tribes because there really isn’t any place to become educated about the tribes on our issues. So it really requires the tribes—whether it’s through NIGA or any other organization—to take the time to meet legislators at all levels to make sure they know our issues and they know who we are. But it’s a process that never ends. We have to work on it very hard at all times.

“It’s a process of not only educating the congressional people or the elected officials; we have to educate the general public. And also sometimes reminding our own tribal leadership about how dedication and hard work are necessary to move things forward.”

Stevens sees a possible threat, however, as Congress eyes potential sources of revenue to tap in order to exit the recession.

“NIGA must also be aware of the potential for states seeking to address their own budget shortfalls by looking to Indian gaming enterprises as a potential solution,” he says. “Thus, the nation’s economic recovery makes the protection of tribal gaming as an important resource a critical goal for NIGA. This is another of NIGA’s educational responsibilities. NIGA will join others, such as the American Indian Business Network, as well as the NIGA membership in meeting this particular challenge.”

Both candidates stress consensus-building and communication as key to the future of NIGA.

“You can always enhance your image and make things better,” says Makil. “NIGA can play a very important role in shaping that national agenda. We can help bring the various players to the table to shape that agenda and raise those priorities. But also, bringing the leadership of the tribes and the decision-makers together will help us build consensus that will be so crucial going forward. We must have these discussions that are really important to consider. As sovereign governments, the tribes can make their own decisions and have the rights and the responsibilities to make these decisions that are in the best interests of their people.

“As tribes vary from location to location, there are different issues. It’s important that those issues get discussed and where there can be some unified position, we can advance those issues and respond to some of the challenges and opportunities we find in Indian Country.”

Stevens says size is power when the group speaks as one.

“NIGA is made up of 184 diverse member tribes, of all shapes and sizes and needs,” he says. “Our membership is our strength, and we are strongest when our voice is unified.

“Consensus-building has always been a traditional process in Indian Country and one on which I personally rely. My father, Ernie, Tim Wapato, and others have said that we must meet as often as necessary until we arrive at consensus, for the good of the community. I believe in this because it has worked with some very difficult issues NIGA has faced. The independence of each tribe in protecting its sovereignty often leads to conflicting interests, but experience has shown me that working and meeting to consensus can and does work.

“In any one of the legislative challenges Indian country has faced during my tenure, we could have splintered, and tribal sovereignty would have been compromised as a result. However, NIGA’s membership has always united behind our core values of protecting tribal sovereignty—and maintaining the integrity of IGRA. These are two constants that bind all tribal leaders, and the base on which our success is built.”

While Indian gaming has been an innovative tool for economic development across Indian Country, outsiders often confuse tribal gaming issues with overall issues for Native Americans. Nothing could be more indicative of this than with the recent Supreme Court Carcieri v. Salazar decision that had nothing to do with gaming, but is used by opponents to warn about an expansion of Indian gaming.

Stevens says Indian gaming is not good or bad, but it is a part of Indian Country.

“To me it’s impossible to couch Indian gaming in terms of harming Indian tribes,” he says. “Indian gaming is a direct exercise of tribal sovereignty. Tribal governments have engaged in gaming activities for centuries. But we’ve gone far beyond just gaming by creating the American Indian Busines Network, which provides opportunities for gaming and non-gaming tribes. This is tribes helping tribes and helps create economic opportunities for all of Indian Country.”

“However, I do acknowledge that some politicians have used Indian gaming as an excuse to oppose non-gaming-related issues like tribal recognition and land-into-trust. To minimize the perception that these issues are unrelated to Indian gaming, we have to continue to educate these politicians and the public.”

Makil says tribes need to be proactive for that education to be effective.

“There are always positives and negatives to any situation; there are very few absolutes,” he explains. “It’s all about perception, so that’s why it is absolutely crucial for NIGA and other Native American organizations to get out in front of any situation and be proactive. We have to define the issues. We have to create the images and branding. Because if we allow others to do this and to brand us, we get misrepresented. We then have to respond to the perception created by others, when often that is not the reality. All the elements of any situation need to be connected because we can only control the situation if we are proactive.

“We need to reach out and tell our story, through our eyes and our experiences. And we have a great story! There’s no need for spin doctors or exaggerated public relations. Gaming is just one part—a very significant part, admittedly—of the Native American experience. Gaming has given many tribes an economic future, but we have to remember that a majority of tribes do not participate in gaming. So we all have to work together to get the message out, and leadership is the thread that binds us all together.”

Makil says his priorities as chairman of NIGA would be to listen to the members and forge ahead when a consensus is reached.

“I’m a little ‘old school’ in that respect,” he says. “I think leadership has to be responsive to its members. I didn’t suddenly wake up one morning and decide I wanted to be chairman of NIGA. I’ve been asked for some time to take this role, but I resisted until the voices got louder and the need got greater. I think that to continue with this evolution of growth that tribes are experiencing—in this industry and outside of it—that we must have new leadership, particularly in respect to the federal government. As tribal gaming has evolved and NIGA has evolved, we’ve all learned a lot. Originally, there was a lot of public support for the tribes in Indian gaming and in NIGA, but recently I realized that support had eroded. And when you take a hard look at the stats and what they are implying, you have to respond.

“So my priorities are rather simple. I plan to listen to the tribes, get the information we need to rebuild the support for NIGA, and build a consensus so we can all move forward in a respectful and unified manner. When we do that, we can set our priorities together.”

Stevens wants to build on his previous successes and continue to reach the goals set by the NIGA members.

“I will maintain NIGA’s primary mission, which is to protect and preserve tribal sovereignty and the integrity of the Indian Gaming Regulatory Act,” he says. “And I’ll continue to do so through building consensus among our member tribes and coalitions with other tribal organizations, and by empowering our tribal leaders and their voices before Congress. Indian Country cannot afford to stray from or compromise one bit from these core values. We must stand together and remain united in order to achieve our goals.”