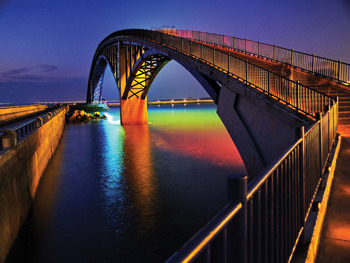 In January 2009, the Taiwan legislature passed a bill that contained a measure to allow casino development on the nation’s offshore islands, should a majority of the local population agree.

The measure was included as an amendment to the Remote Island Development Act, which sought to encourage investment on several of Taiwan’s smaller, economically challenged islands.

One month earlier, Taiwan’s Committee for Economic Planning and Development had presented a list of recommendations which could influence the eventual casino legislation. Suggestions from CEPD included a proposal to require a minimum investment of $1 billion, to plan for a minimum land area of 10 hectares and to require the project be an integrated resort in the style of the two Singapore projects then under construction, Marina Bay Sands and Resorts World Sentosa.

CEPD also suggested a gaming license be valid for 20-30 years, with a gaming tax of 10 percent and a special allowable operation tax of 5 percent.

The outlying islands referred to in the law include the archipelagos of Penghu, Kinmen and Matsu. The suitability of these three island groups for casino resort development varies due to such factors as distance to Taiwan, distance to China, local economic conditions and military role.

The three main islands of Penghu were seen as the most likely candidates for casino resorts. The resort and commercial fishing center is only a 30-50-minute flight from Taiwan’s main population centers, and the seasonal character of the local economy suggested Penghu as a candidate for additional economic development.

Expressing its support for gaming, shortly before the bill was passed, Penghu county government announced it was seeking private investment of NTD30 billion-over $900 million-to aid in the development of casino resorts.

The initial project would involve the development of a 120-hectare resort featuring a hotel with more than 2,000 rooms, casinos, golf courses, a convention center and a duty-free shopping mall. Two locations named by the Penghu officials as likely sites of the project were Houliao Bay on Baisha Island and the Huhsi Port area on the main island of Makung. Design was to begin in 2009, the private investment component finalized by February 2010, and development to start in 2011.

A separate effort to construct a casino resort on Penghu had been started a decade earlier by commercial developer AMZ Holdings Plc. The London Stock Exchange-listed company had begun the process of acquiring land on the main island of Penghu as far back as 1999. The resulting 10.8-hectare AMZ property had been rezoned from agricultural to commercial use, and the company’s original plans included a 600-room luxury hotel and a casino of minimum 130,000 square feet.

The Kinmen islands were seen as being the most desirable site for a casino resort from the standpoint of physical location. However, at the same time, they presented a more complicated picture. Situated just a few miles from mainland China, the province is also one of the wealthiest of Taiwan, and the Remote Island Development Act would arguably be more intended to improve conditions in a place like Penghu, where seasonal employment is the norm.

But the real irony of Kinmen is that, while it is closest to mainland China and thus would profit more from the potential of attracting Chinese players, the very fact that it would profit from such visits suggests to some a political liability. The thought being: If China is allowing its citizens in effect to give their money to Taiwan, what might China want from Taiwan in return?

Since 2001 the main island of Kinmen has been receiving tourists from China by ferry, primarily those curious about this once-heavily fortified outpost. As this activity increased, there developed the idea of building a bridge between Kinmen and the Chinese port city of Xiamen, which would put Kinmen only a 30-minute drive from China.

An article from the Central News Agency cited a 2007 poll of Kinmen’s 50,000 residents in which 84 percent of respondents listed the construction of a bridge as an important issue, to create closer ties with China. There were almost 1 million journeys between Kinmen and Xiamen in 2008.

But although the bridge proposal may be popular locally, according to the article, there is little enthusiasm for it within the Taiwan national government. A feasibility study on a bridge is under way, but there is no pressure to complete it. Political opposition cites the bridge project as another move closer to China.

However, “closer” is just what supporters of the bridge seem to want. In recent years, parents have been sending their children to school in Xiamen, and some have begun buying homes there and in other nearby communities on the mainland. Other Kinmen residents point to new water mains and electricity lines from China as welcome byproducts of any bridge project.

Another politically sensitive aspect of building casino resorts on Kinmen could be the potential for competition with Macau. The island is located about 350 miles up the coast from the current casino center. Lin Chin-liang, the local government head of Little Kinmen, has even been reported as saying he’d like to see the island become a “little Macau.” A move to build casinos here rather than in Penghu, which is physically much closer to Taiwan, would be a clear sign that the targeted player is the mainland Chinese.

With the backing of the president, the passage of legislation and local government support, casino gaming for Taiwan seemed to be right around the corner. But in September 2009, the residents of Penghu voted down the measure in a local referendum. Only 42 percent of eligible voters turned out to cast a ballot, with over 56 percent voting no.

Aside from the naturally conservative nature of the local population and organized efforts by the usual anti-gaming forces, some industry experts saw the failure of the referendum as a failure of government to adequately explain the additional benefits a casino resort industry would provide.

But perhaps a more important factor was that the national government, having passed the initial legislation, had been too slow to create a structure that would give voters confidence in the coming process. Only recently did the government complete two tenders for assistance with creating the legal and regulatory framework for casino gaming. These were a tender for planning a tourism zone with gaming for the offshore islands and a tender for developing laws and regulations to govern gaming. The former was awarded in March and the latter in April, though at the time of this writing the name of neither recipient had been revealed.

The successful bidders will work with the ministries involved to create a bill for the next legislative session, which starts in August. The bill is expected to pass by the end of 2010, which is when the session ends.

Should the bill pass, Penghu is expected to push for a new referendum on casino resorts. The governor and a delegation of county officials reportedly met with the Taiwan Gaming Control Board recently to formally express their desire to try again. It is believed that a more effective pro-gaming effort by local government and business will produce a “yes” result at that time.