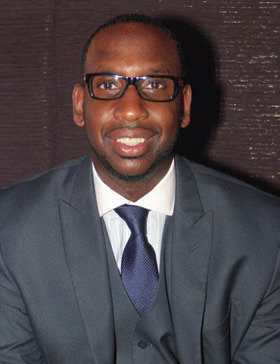 Andre Jackson is proof that to be successful in the gaming industry, one must truly embrace the meaning of the word “hospitality.” To him, hospitality means “creating experiences and treating hotel guests the same way you would like to be treated while on vacation.” As the assistant director of hotel operations at Flamingo Las Vegas, he excels at ensuring superior guest service while optimizing the property’s financial performance.

Jackson has been successful in the hospitality industry for over 15 years, since earning his bachelor’s degree in restaurant and hotel management from the University of Houston. Intrigued by casinos after taking several related classes in college, he joined the gaming industry in 2005 as a front office supervisor at Grand Casino Tunica and eventually worked his way to Las Vegas.

While employed at the Imperial Palace Hotel and Casino in 2010, he encountered the decision that has had the largest impact on his career to date: switching from operations to Continuous Improvement. New to Caesars at the time, Continuous Improvement consists of a team that delves into different departments in order to identify and resolve any departmental inefficiencies. It was this yearlong experience that taught Jackson many skills that he continues to use in his current position. “I learned so much that when I came back to operations a year later, I was a stronger leader,” he says.

Using his passion for providing excellent guest service, Jackson has won several awards, including the most prestigious award at Caesars Entertainment, the Chairman’s Award. This particular award is one that Jackson is especially proud of winning not once, but twice during his time at Caesars Entertainment. In 2010, he was selected from a pool of 30,000 employees for the Chairman’s Award for the Western Region. In addition to these awards, he has also been featured in Who’s Who Las Vegas magazine and has actively served on committees for the Nevada Hotel and Lodging Association.

While Jackson’s success has undoubtedly been a result of his self-motivation and passion for the industry, he has credited several colleagues that helped him along the way.

“Karie Hall (the general manager of Cromwell) inspired and forced me to do things that took me out of my comfort zone, and Mary Ann Dennis (the senior vice president of teleservices in Caesars Entertainment) has always given me good career advice,” he says.

He also recognizes the role that his current boss has played in shaping his present and future professional career. “Norris Hamilton (director of hotel at Flamingo Las Vegas) has helped me to manage managers and to be an impactful leader of people.”

Jackson passed along some advice that he has learned in the gaming industry over the last decade.

“Find a mentor in the industry that can give you advice on your career path, and be very humble,” he says.

This piece of advice can be useful in many different industries, as any young professional can benefit from having a mentor to guide them through career challenges.

Jackson also offers a message that is especially true in the hospitality industry: “Don’t burn any bridges, because everyone knows everyone else,” he says.

Although the industry may be challenging at times, it is important to remain professional and remember what is important: staying true to your passion. Jackson is an inspirational example of a gaming professional who not only loves his job, but also has true passion for the gaming and hospitality industries.