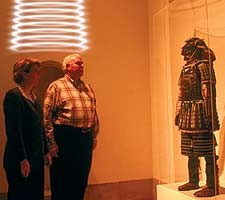 Imagine broadcasting audio messages straight to your target audience and nowhere else-like a laser beam, except that it’s sound instead of light. That’s the SpotDAP, sound-generation technology that targets specific areas, soon to be introduced to casinos by Toulouse, France-based RSF, a manufacturer of audio, video and show control products that is branching out into the gaming market.

This technology is being used in Europe at locations such as Disneyland Paris and the British Museum of London. Other applications include digital signage, points of sale, kiosks, grocery stores, lobbies, parks and banks.

In a casino where many machines and activities compete for attention, the SpotDAPs can direct sound where the casino wants it (with a directivity of 3 degrees). This reduces noise pollution levels-in casinos, it would target sound around the clamor of the slots.

Small and lightweight, the SpotDAPs are simple to install, as all their elements are contained within the enclosure (including digital processing, amplification and emitter devices).

They are easily connected to any audio source. No power amplifier is necessary. SpotDAPs work on the same principle as an active loudspeaker.

Defying the principle of the inverse square law, the SpotDAP’s sound level decreases very slowly with distance. The manufacturer says this feature is unique to its HyperSonic Sound technology. The sound remains clearly intelligible up to 20 meters away.

At museums where the product was deployed, sculptures or paintings were made to come alive with sound. They can also be used to attract a visitor’s attention by directing it along passageways.

For marketing purposes, RSF has signed an exclusivity agreement with SGC to take advantage of their understanding of the industry.

RSF sees potential applications including positioning the speakers directly over gaming tables, giving each its own sound channel without disrupting others.

Either inside or outside casinos, the SpotDAP is great at attracting attention. The sound is produced in the air just next to the listener’s ear. This means that to the listener, the source is extremely close. The natural human instinct is to pay much more attention to close sounds than distant ones; therefore, on walking into the sound beam people can’t help but to turn around. This approach can either be used on its own, or coupled with the TV screens used in digital signage.

Another application in the gaming industry could be in sports books-different screens can show different sports events, and can each have their own independent sound channel for commentary.