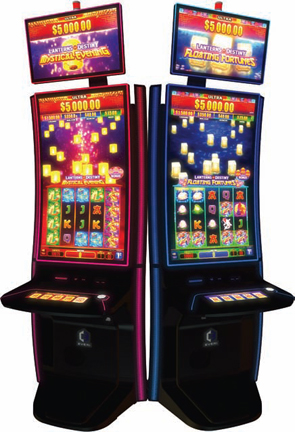 There are two inaugural base games, Floating Fortunes and Mystical Evening. Both feature colorful graphics across the Empire Flex 49-inch curved monitor.

The base game is a five-reel, 40-line video slot. Above the four-by-five reel array on the tall curved monitor are floating lanterns that figure both in the primary game and bonus features. On any given primary game spin, a mystery “Wild Lanterns” feature can add up to eight wild symbols to the reels, some with multipliers up to 5X on winning combinations.

Wild Lanterns on primary games accumulate on a meter above the reels until triggering the “Mystery Lantern Pick Bonus.” The player picks five lanterns on the top of the monitor to win credit prizes, one of two static or three progressive jackpots, or additional picks. Because of the extra picks, multiple jackpots can be won in a single feature. The static jackpots are $15 (Mini) and $40 (Minor). The progressives reset at $350 (Major), $1,500 (Grand) and $5,000 (Ultra).

The Free Spins bonus can be particularly lucrative. When the feature is triggered with three or more bonus symbols, the reel array doubles to eight rows high. During the free-spin round, which retriggers frequently, “sticky wilds” are featured—up to 30 wilds, some with multipliers up to 5X, remain in place for the remainder of the feature.