Korean residents would be allowed at new resorts, not at existing foreigners-only casinos. 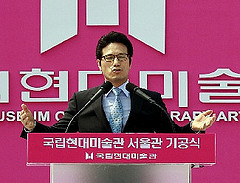 The tourism minister of Korea has come out in favor of allowing locals to visit and play at future integrated resorts.

“If we are going to build casinos, then it should be open to all, Koreans and foreigners,” said Chung Byoung-gug, minister of culture, sports and tourism, speaking to the Korea Chamber of Commerce last month.

The Chosun Ilbo reported that Chung did not agree with barring Koreans from entering integrated resorts while seeking foreign investment for the properties.

“It is simply unfair,” said Chung.

At present there are 17 casinos operating in Korea. All but one are off-limits to Korean residents, which spurs locals to travel abroad to play at casinos.

“Since many Koreans disapprove of opening casinos to local citizens,” Chung said, “those who want to gamble go abroad and spend their money in foreign countries. The result is that we end up losing out on what should be a highly lucrative and high-end tourism draw.”

When a question was asked about the problems associated with casino gaming, Chung said he believes the Korean society is mature enough to control its actions.

“I do not believe the negative effects will be so huge,” said Chung. “I trust that Korea has the ability to prevent the negative side effects from taking over.”

Chung made it clear in a later interview with the Chosun Ilbo that Koreans should not be allowed to enter the existing foreigners-only casinos.

To establish a modern gaming industry and keep some of the traveling money at home, the government wants to see integrated resort-style casinos in its designated foreign economic zones and on Jeju Island.