Korea is looking at licensing five or six integrated resorts. Kangwonland (l.) is the only Korean casino open to citizens of the country, while 16 small casinos are available to foreigners only. 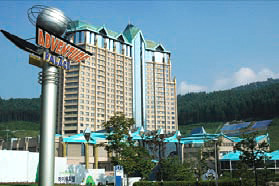 Korea could be the site of the next integrated resort boom.

GamblingCompliance reported last month that officials at the Korea Tourism Organization would like to see at least five integrated resorts on the order of the Singapore model. The government agency wants to see a bill debated in the National Assembly by late 2011 and a vote within the following two months.

The advisory board to the KTO will emphasize three elements in their push for IRs: enhanced tourism, new jobs, and turning Korea into a leading regional MICE destination.

There are a number of factors that could be spurring the present drive by the KTO.

Conversely, Koreans spending outside the country rose 15.4 percent to KRW20.3 trillion—about $18.4 billion. It was the highest level of annual spending overseas since officials began collecting data in 1970.

On the political front, the opposition Democratic Party scored a landslide victory in local by-elections last month. The result caused the heads of the ruling Grand National

Party to resign from their party posts and could presage a change in government after next year’s national elections.

A KTO spokesman predicted the Korean gaming market could be at least four times that of Singapore, and more than 10 times larger than Korea’s current foreigners-only market.

Korea has 16 small casinos that are open only to foreigners and one at which residents are allowed to gamble, Kangwonland, in a more remote part of the country. The issue of allowing locals to gamble will be crucial to the success of any new casino initiative.

Las Vegas Sands President Michael Leven recently said that although Japan is a priority in Asia, “Korea is at least as equal a target if we can get locals gaming in there.”

In a recent interview with the Korean Maeil Economy newspaper, Leven said LVS is prepared to invest $4 billion in Korea if locals are allowed to gamble.