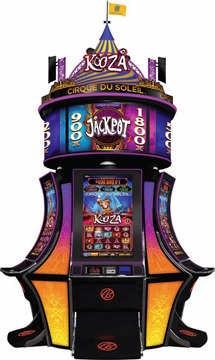 This new Bally title is the first slot machine ever to carry the theme of a famous Cirque du Soleil production, in this case the touring show Kooza, which premiered in 2007.

Kooza, the slot machine, recreates all the characters from the circus-themed road show, including “The Trickster,” who reprises the role of central character in the slot theme. Other characters including “The Innocent,” “The King,” the two court clowns and others are recreated as reel symbols in the base five-reel, 40-line video slot.

There are several bonus events built around the theme, including mystery events in the primary game and a wheel bonus on a unique spinning display built into top of the circular Bally Alpha 2 Pro Wave 360. This configuration uses a spinning circular display above four games in Bally Pro Wave cabinets, each featuring a concave 42-inch curved vertical monitor.

The wheel bonus can award credit prizes or one of four progressive jackpot levels, ranging from a “Mini” resetting at $25 to the wide-area “Magnifique” jackpot, resetting at $400,000.

The primary game features random events including Mystery Stacks, which bunches like symbols together for large wins; and Instant Win, which gives the player a pick from three icons to reveal an instant credit award. There are two different free-game events, called Trickster Free Games and Wheel of Fire Free Games. Both are triggered as outcomes of the Bonus Wheel, which is triggered through bonus symbols on the reels.

The “Kooza Jackpot” result on the Bonus Wheel triggers a separate wheel, viewed from the side, game-show style, which can land on one of the four progressive jackpots. The maximum bet of 300 credits is required to qualify for the progressives.