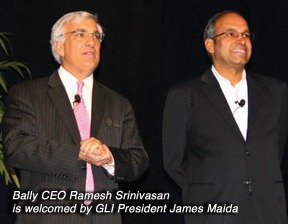 For many regulators, the GLI Roundtable is the highlight of the year. Toiling away in government offices doesn’t provide much feedback for the difficult evaluations and decisions made by those dedicated public servants, so a trip to Las Vegas to hear about the latest technology and network with similar public officials from other jurisdictions is just what the doctor ordered.

The GLI Roundtable held its 12th edition last month at the Flamingo Hotel and Casino, and recorded a record number of attendees, with more than 400 regulators and public officials accepting the invitation. GLI, one of the leading testing labs in the gaming business, has expanded dramatically over the past several years. President James Maida explained to the audience that the company has added over 200 employees in the last two years to accommodate the massive increase in business, as well as prospective testing challenges that will come with the onset of online gaming in major markets like the United States.

In addition to general sessions that addressed topics of interest to all attendees, the GLI Roundtable also featured “Learning Modules” that broke down the overall topics into smaller, more focused sessions. Online gaming was a key component of the discussions this year, considering the legalization of the electronic wagering systems in three states and more likely to join in.

And attendees and invited guests of GLI gathered for a fun event at the end of the first day. GLI took over the Margaritaville Restaurant in the Flamingo, featuring food, drinks and networking.

At the opening keynote address, Bally Technologies President and CEO Ramesh Srinivasan addressed the audience and stressed how quickly the gaming industry is changing, and why regulators need to stay ahead of the curve.

“It’s a fast-paced world,” said Srinivasan, “and the gaming industry must get better and learn how to change.”

He also explained that even though there is a perception that gaming technology companies are on the cutting edge, there are many hurdles that hold back those types of companies, including flat revenue for slot manufacturers over the past five years, capital constraints, the relatively slow speed of the B2B business model versus the B2C model, and disputes over intellectual property.

The panelists began by noting that “virtual goods” are the underpinning of all social gaming, and by their very nature, they have no value. But Cramp noted that there are some exchanges where these “goods” can be exchange for things of value. Nonetheless, there is little monetization of social gaming, so regulations are not necessary at this time, they all agreed. And because there are no laws governing it or court cases defining it, establishing regulations would be difficult.

But the future is a different story. Mullally pointed out that virtually all companies involved in social gaming have plans to monetize social gaming and move players from their “premium games” to money games. That’s when regulations will become necessary, said Hummingbird.

But perhaps the lynchpin for the GLI Roundtable each year is the interaction between Maida and Patrick Moore, GLI’s director of technical compliance. The two identify issues that regulators must consider each year; things that will change the way they do things. This year, the list included many technology advances:

1) New Technology vs. Legacy Regulations: With technology advancing so quickly, Maida emphasized regulators must also move quickly. If the regulatory structure requires long consideration of new rules, Maida says agencies should find a fast-track method to change rules, or the regulations themselves will start to regress.

2) Skill-Based Gaming: While most regulations about skill-based games centered around poker and blackjack, Moore explained that many slot machines now have skill-based applications, mostly in the bonus rounds, which requires physical dexterity to get the biggest advantage. He said these games have begun to attract Gen X and Gen Y players because of the similarity to video games. And in addition to joystick-like devices, the technology is advancing quickly to include biometric moves, like gazes, gestures and voice. Although those advancements are not yet field-ready, it won’t be long.

3) Promotional Games: Like community games, these games have communal features that include several machines, banks of machines or all the machines in a casino. Triggered by “picture-in-picture” technology, these games have a player interface technology that is groundbreaking.

4) Cloud Computing: Hardly a new technology, cloud technology is new to gaming, and regulations will require quick updates to stay current. The challenges for regulators are the off-site locations and the security of the cloud itself. And audits of cloud operators may become necessary in the future.

5) Social Gaming: This is the wild card. Today, the focus is on the premium model (players pay to buy points) versus free play. The games have strong demographics: women 25-38. And there’s a big lottery component to social games that will continue to expand.

6) Game Authentication Terminal: GATs are a connection with a laptop computer that allows machines to spill out all their data to the computer using a protocol adopted by the Gaming Standards Association. The computer basically interrogates the game. By satisfying GAT requirements, the protocol revolutionizes how the floor is managed from a regulatory standpoint.

7) Network Security: With hacking seemingly a daily occurrence, it’s only a question of time before an online casino is hit. So more robust network security is necessary, including higher encryption speed, complicated algorithm changes, stepped-up cyber security and the expansion of two-factor authentication for players.

8) Convergence: The i-gaming and lottery markets have already converged, with most companies having dual divisions. But the gaming market is also being addressed, with companies like Lottomatica (soon to be GTECH), Scientific Games (the recent purchase of WMS Gaming) and Intralot all having slot manufacturing businesses, as well as lottery and online gaming divisions.