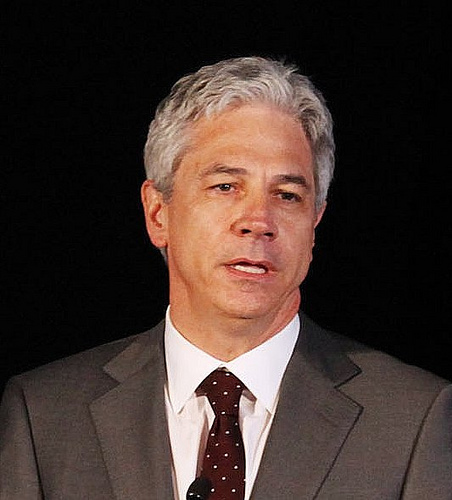 In April, just as he was about to wrap up the last piece of the financing puzzle for the Revel casino resort in Atlantic City, Kevin DeSanctis’ legs were cut out from under him. His partner, investment bank Morgan Stanley, took that moment to announce it would sell its investment in Revel at a “significant” loss. Since the financing was contingent upon a Morgan Stanley role, the deal collapsed and it was back to square one for Revel CEO DeSanctis. Since then, Revel has released a redevelopment plan for the South Inlet neighborhood where it is located and DeSanctis is now putting together a team that wants to buy the Morgan Stanley piece of the project so his quest for the final financing can go forward. He spoke with Global Gaming Business Publisher Roger Gros and Editor Frank Legato at his offices in Atlantic City in June. To hear a podcast of the full interview, go to www.ggbnews.com and click on the GGB Podcast button.

GGB: Let’s get the tough questions out of the way at the start. What is the status of the remaining
financing for Revel?

DeSanctis: We had been working with the Export-Import Bank of China to secure the financing to complete the project. When Morgan Stanley elected to sell their interest in the project, that changed the dynamic completely. We had been working with all the parties for about a year to get that transaction completed but with Morgan Stanley’s decision to move out, that piece is now on hold.

Did it surprise you when Morgan Stanley announced that it was pulling out of Revel?

Morgan Stanley obviously is a huge business and we were a very small part of their operation. On a long-term basis, Morgan Stanley always wanted to have a passive interest in our property and in the past few years, they’ve helped a great deal in keeping this project moving. I think they felt, however, this was the appropriate time to exit their investment.

Exactly how is the sale going to proceed? Will Morgan Stanley take bids? How long will they
wait until they sell?

It’s a process, and we’re working with them to make sure that process moves very smoothly. I would expect in the next several weeks to be in a position to talk much more broadly about it. At the end of it, my intention is to find a way to purchase Morgan Stanley’s equity, with some partners, to arrange for the final financing and to get this project open.

We reported that you were visited by Steve Wynn a couple of months ago. Some people thought he’d take over the Morgan Stanley investment and finish the project. What happened at that meeting?

There isn’t really much to talk about. I received a call informing me that he was in town and wanted to stop by and say hello. We spent around 20 minutes, maybe a half hour, together. It was largely a social visit. We spent a few minutes talking about Revel. He was interested in the top of our building and he explained what he did to the top of his building.

You’ve been participating in the meetings that Atlantic City Mayor Lorenzo Langford has been hosting to fix the problems in AC to revive tourism and gaming. Are they doing any good?

I think a lot of progress has been made. Unfortunately, we’re all part of the “Pepsi generation” and want instant gratification. But it’s taken a long time to get to this point and I think it’s going to take a little while to get to where we should be. But in terms of the communication, the willingness and the desire to change things? I think that’s all present and I have zero complaints. Everyone who I’ve been working with wants to see things improve.

But there’s a reality to it and it’s not all going to happen at once. And it’s going to need two things that people don’t always think about. First is a belief that things can indeed change and get better. And in an economic environment like we’re in now that’s very difficult. It’s so easy to be down on Atlantic City.

Second is the capital. And the capital doesn’t come without the first thing happening. Capital has to be invested in this town. I constantly hear, “You can’t invest in Atlantic City now. Wait and see.” I don’t even understand that. Wait and see if what is going to happen? Because if you don’t invest, I can guarantee that nothing is going to get better. But if you think you have a good reason to invest like we do, then you’d better invest now because this is the right time to invest, in terms of getting encouragement, cooperation, permitting… now is the right time if you want to develop something.

The discussion of slots at racetracks is continuing if not even increasing. What would this do to your financing efforts?

Without a comprehensive thought process and thoughtful discussion with all the parties involved, I think it would create a stability issue in New Jersey, and that’s my major concern. New Jersey has enjoyed stability for a very long time, and that’s the key to the success of the gaming industry in the state. Everybody on Wall Street likes one thing: certainty. They just want to know what the rules are going to be. On a long-term basis, we need to have a discussion between the state, the city, the industry and all interested parties on what the overall model is going to be in the future. I’m always disappointed when it only comes up during budget season because you can almost guarantee the wrong decisions will be made. Right now, I haven’t heard a solution that makes me believe there’s something out there that works for everybody.