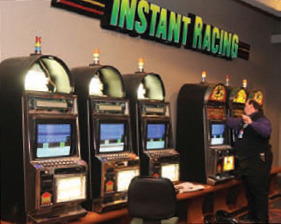 Kentucky Downs appears to have made the right bet. The racetrack near the Tennessee border has taken in a total of 4,431 from its new gaming machines in just five days. As the only establishment in Kentucky to offer the “Instant Racing” games, the outcome is being closely watched. Although some media sources reported a daily win-per-machine of more than 0, it appears they mistook the handle for the hold, and the machines actually won an anemic per day.

The game is under legal review in the state Court of Appeals after the Family Foundation of Kentucky asked for an injunction to halt operation of the games. If the court rules against Kentucky Downs, the machines might need to be removed.

The track, which has 197 machines, began offering Instant Racing last month. Based on a parimutuel wagering system using past horse races, the terminals resemble casino-style slot machines. Similar games have been offered in neighboring Arkansas. The racetrack, which held its annual four-day live race meet over the Labor Day Weekend, introduced the games at a soft opening to limit any initial problems.

“We wanted to make sure that our systems, our operation, our level of customer service, our facility all worked in a first-class manner,” Kentucky Downs President Corey Johnsen told the Kentucky Horse Racing Commission. “I’m very pleased to report to you today that is the case.”

Johnsen sees considerable growth as customers learn more about the wagering. A marketing campaign, aimed primarily to patrons from the Nashville area, has now begun in earnest. The track invested $3 million, hiring 85 new workers, to launch the new games.

Johnsen said additional revenue from Instant Racing, which will be offered year-round, will allow the track to apply for two more live race days in 2012 and to stay open additional days for simulcast wagering on races at other tracks.