The outbreak of the Coronavirus has had a major impact on the gaming industry. With this in mind, GGB is committed to providing updated news and analysis on our weekly news site, GGBNews.com.
Dateline 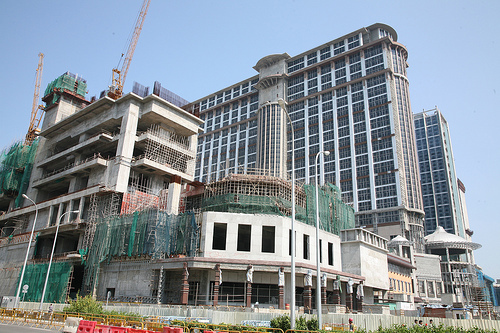 To build a casino resort on the reclaimed land in the Cotai section of Macau, each company must receive a land concession from the government prior to the start of construction. Until recently, these concessions have been simply a formality, but with the ascension of the new chief executive, Fernando Chui, the government had signaled it would look long and hard at undeveloped concessions and possibly remove the authorization to build.

That’s what happened last month to Sands China when the government claimed that the company had failed to submit a request for the concession until after a freeze was put on the concessions after concerns about transparency were raised by the administration of former Chief Executive Edmund Ho, although the company had said in a recent filing that it had capitalized $102.4 million to begin construction there.

Construction on two parcels—5 and 6—is currently being completed, despite difficulties in hiring enough construction workers under Macau’s “foreign workers” restrictions, and plans for parcel 3 are progressing. But since no plans have been received for 7 and 8, the government acted. Sands China immediately appealed to the chief executive and has 30 days to appeal to the Macau courts if it wants to challenge the decision.

In addition, the government responded to a letter from Stanley Ho’s SJM expressing interest in developing these sites. It rejected a bid by SJM to take over the land in order to build a casino resort. The government said that a public tender must be held to award a new concession on the land, according to the Wall Street Journal.

“He noted that the land granting process is also not made under concessionaires needs,” the group said in a note to investors. “This suggests to us that this concession denial could be technical and a function of timing, and that ultimately Sands should be able to develop sites 7 and 8.”

Since other casino companies submitted their concession requests prior to the land freeze, they will not be affected by the Sands China decision, the government said. Wynn Resorts is currently planning its first entry into the Cotai area, which will soon be followed by a plan put forth by MGM Resorts and its partner, Pansy Ho.

Despite the Sands decision, Tam’s comments were seen as a positive for Cotai development. The minister had outlined a growth rate of between 3 percent and 5 percent per year in table games, which would permit both the Galaxy Macau, scheduled to open in early 2011 and the casinos on parcels 5 and 6 for Sands China, which may open in early 2012. Other properties, such as Wynn and MGM, would not open before 2014 at the earliest, which would be within the growth boundaries as set by Tam.