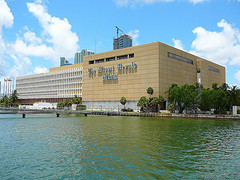 Although it owns and operates the world’s largest casino in Genting Highlands in Malaysia, as well as one of Singapore’s lucrative integrated resorts, Genting is little known in the U.S. But that will change as the company is making aggressive moves in both New York and Florida.

Genting New York LLC, the stateside subsidiary of Genting Berhad of Malaysia, may boost its investment in the Aqueduct racino project by building a convention center.

The operator of Resorts World Casino at Aqueduct in New York City “is absolutely interested in undertaking additional projects on the land surrounding Aqueduct if the right opportunity exists,” says Resorts World spokesman Stefan Friedman. “Of course, our focus right now is opening Resorts World Casino New York, which will help stimulate the local economy in Queens by providing 1,150 new permanent jobs and countless indirect jobs into the community.”

According to the Southeast Queens Press, New York state Senator Joseph Addabbo has confirmed that Genting could develop the area around Aqueduct, and offer a newer, more accessible alternative to the aging Jacob Javits Center in Manhattan.

“If they decide to move forward with a convention center, it could have a great impact on job creation,” said Addabbo. “We as a city need to compete with other cities around the country.”

Resorts World was first set to open in the spring, but the debut has been pushed back to October 1. The racino will offer 2,500 slot machines to start, with 2,000 more coming in Phase II.

Meanwhile, the international casino developer, which just opened the $5.5 billion Resorts World Sentosa in Singapore, has made further inroads in the U.S., signing a contract to design a $3 billion downtown Miami resort.

Though gaming is not yet legal in the resort city, the pressure is on the Florida legislature to green-light casinos; many major gaming companies have expressed interest in building there.