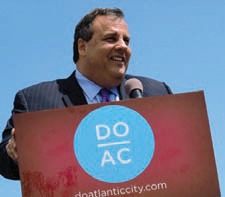 Online gambling is expected to have long-term effects on Atlantic City, which has suffered six straight years of declining revenue. Gaming experts have predicted internet gambling could generate as much as $1.2 billion in its first year, but others say that estimate is too high.

Christie had conditionally vetoed the bill on February 7, and New Jersey lawmakers worked quickly to re-craft the measure to meet the governor’s approval. Players will now be able to place bets within state borders from their personal computers or mobile devices through servers based at Atlantic City casinos. Games include all types currently being played on casino floors. Internet gambling revenue will be taxed at 15 percent, up from the 10 percent originally proposed. In comparison, gambling revenue won on the casino floors of Atlantic City is taxed at 8 percent.

The legislation will have a life span of only 10 years, a trial period the governor insisted upon to assess the effects of online wagering. After that, lawmakers must reauthorize the legislation for it to continue. An increase in funds for gambling addiction was also part of the governor’s recommendations. Ethical provisions have been worked into the bill, extending prohibitions on casino-related employment to internet gambling licensees and affiliates and requiring elected officials to disclose their representation of or participation in entities seeking or holding internet gambling licenses.

Perhaps most importantly, the bill allows reciprocal agreements with other states that would allow residents of those states to place a wager through Atlantic City’s internet gambling system. Nevada beat the Garden State by a week when it rushed to pass expanded legislation allowing bets on internet poker from players outside the state in legal online gaming jurisdictions.

Interstate compacts will be essential in the growth of online gaming—especially shared poker pools—and could help Atlantic City become a leader in the field. Most experts agree the potential player pools in Delaware and Nevada are too small to create profitable online gaming ventures by themselves, but with New Jersey’s large population, it could stand alone and still be successful.

“Finally, some good news for Atlantic City’s future,” said state Senator Raymond Lesniak, one of the strongest proponents of online gambling. “Internet gaming will give an immediate boost to the outlook for Atlantic City’s future, preventing the closing of at least one casino, and saving thousands of jobs,” referring to the almost 3,000 employees at the Atlantic Club and Trump Plaza, the city’s weakest-performing properties.

The Atlantic Club is being bought by the Rational Group, owners of the leading online poker sites PokerStars and FullTilt Poker, while the California-based Meruelo Group recently purchased Trump Plaza. Both deals were contingent on the passage of the internet gaming bill.

Christie, who had vetoed an internet gambling bill last year over constitutional concerns, weighed the implications of AB 2578 carefully.

“This was a critical decision, and one that I did not make lightly,” Christie said. “But with the proper regulatory framework and safeguards that I insisted on including in the bill, I am confident that we are offering a responsible yet exciting option that will make Atlantic City more competitive while also bringing financial benefits to New Jersey as a whole.”

Some of those financial gains have already been factored into Christie’s 2014 budget. Shortly after signing the bill, the governor presented his $33 billion budget proposal, which included a $200 million increase in projected casino revenue taxes in 2014 from internet gambling.

Some analysts believe that the estimates for online gaming revenue stated by proponents and the Christie administration are too high. Union Gaming Group of Las Vegas believes that Christie’s estimates are double what can actually be expected.

“The governor’s budget summary estimate that proceeds from total casino revenue will be $435.8 million in FY2014, which is up nearly $200 million from $235.4 million in FY2013,” Union Gaming wrote in a note to investors. “The state treasurer’s office estimates that $180 million (90 percent) of the $200 million increase will be related to online gaming. The state is assuming some organic growth in casinos driven by economic recovery and citywide marketing initiatives. Backing into the market revenue size by using the 15 percent tax rate suggests the state believes it will be $1.2 billion. For comparison, Atlantic City casinos collectively generated $3.05 billion in gaming win in 2012. The state is also not likely considering any potential impacts of cannibalization that online gaming could seemingly create.”

“The two main drivers of online gaming revenues are penetration rate and yield per account,” the report continues. “Yield per account is the theoretical annual value of each online player… Combining the two products in New Jersey, we expect the market from a revenue standpoint to generate $530 million in the first full year of operations (versus the likely $1.2 billion the state is forecasting) growing to $840 million after a five-year ramp.”

The bill will not take effect until the state Division of Gaming Enforcement announces a start date. The DGE is under a tight, three- to nine-month deadline to establish a regulatory framework. That framework will have to include player identification and geo-location technology to prevent underage and problem gambling. Gamblers would have to set up online accounts with a particular Atlantic City casino—most likely in person. Regulations are expected to allow players to set daily limits on play and per-hand limits similar to those established on casino floors.

There could also be some legal challenges to the system, particularly if interstate compacts are enacted. It’s unclear if the Justice Department would seek to stop any cross-border online gambling, even though it issued a memo in late 2011 saying that only online sports betting is considered illegal under the 1963 Wire Act. But the Unlawful Internet Gambling Enforcement Act of 2006 may be a factor. In addition, the New Jersey racetracks were written out of the bill after being included in a 2010 version that Christie vetoed, so a legal challenge from that group is not out of the question.

Casino executives have estimated it could take six months to a year to get the system up and running. Gary Loveman, chairman and chief executive officer of Caesars Entertainment—which runs four properties in Atlantic City—predicted it would be closer to 18 months to two years.

Commenting on the potential gains of internet gaming, Loveman told casino analysts, “In New Jersey, you can see it’s quite a meaningful market for us, and we think it will be quite profitable.”

War of the Worlds

With the passage of the bill, the Rational Group’s purchase of the Atlantic Club moved forward and ignited a firestorm of criticism from the American casino industry. The company’s PokerStars website was shut down on “Black Friday,” April 15, 2011, when the Justice Department handed down indictments against PokerStars, Full Tilt and Absolute Poker, charging racketeering, money laundering and more. Rational paid a $731 million fine to the DOJ to have the charges dropped with no finding of guilt.

Since the New Jersey legislation includes no “penalty box”—a five-year period imposed on companies that continued to accept U.S. bets after the 2006 passage of the Unlawful Internet Gaming Enforcement Act, which is included in the Nevada law—Rational is able to pursue a New Jersey license. In March, the American Gaming Association objected, citing previous law-breaking by PokerStars, and asked to intervene in the New Jersey regulatory investigation, urging the regulators to block a license for Rational.

In response, Rational asked the state to reject the bid because the “AGA lacks a significant interest in the outcome,” and calling it a “thinly veiled anti-competitive campaign against the entry of a competitor into the market.”

Many observers see the hand of Caesars Entertainment behind the AGA move. Caesars is poised to dominate a New Jersey market with its powerful World Series of Poker brand, but the entry of the possibly more powerful PokerStars brand could derail the online plans of the gaming giant.

In a related development, Forbes reported that Caesars tried to sell its Rio Casino Hotel in Las Vegas, along with the World Series of Poker, to Rational in early February.

In the letter to the New Jersey regulators seeking to keep the AGA out of the PokerStars investigation, Rational said, “At that time, Caesars suggested that this acquisition would give Pokerstars a better relationship with Caesars and would help PokerStars gain a license in Nevada.”

Rational rejected the approach because “it had no plans to acquire another casino in the near term.”