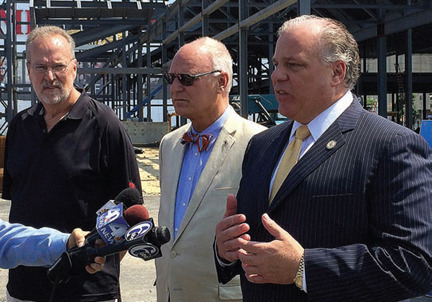 The struggles of the casino industry in Atlantic City over the past seven years have been well documented. More than half of the city’s gross gaming revenues have disappeared after more than 30 years of steady increases. The blame falls on regional competition, a bad economy and nebulous smoking bans, but the lack of preparation in the face of upcoming competition also played a big part in the decline.

And now more competition to Atlantic City casinos could arrive within their own state. Last month, Democrats in the state legislature approved a bill that would place a constitutional referendum before the voters in November to authorize two casinos in North Jersey. Factions of the party were at first divided over the amount of money that would be dedicated to Atlantic City to ameliorate the damage done by those two new casinos, and who would own the new casinos (Atlantic City casino companies or out-of-state companies).

In the end, a compromise was reached to give Atlantic City casinos six months to initially bid for the North Jersey casinos, which must have a price tag of at least $1 billion. The casinos could partner with an out-of-state company that would be allowed to own up to 49 percent of the project. If after six months there were no proposals from Atlantic City casinos, the bidding would be thrown open to out-of-state companies.

A tax rate will be set by the legislature after the referendum passes. While Atlantic City casinos pay an effective rate of 9.25 percent, North Jersey casinos are expected to be higher, but not quite as high as the 50-percent-plus rate paid by New York and Pennsylvania casinos.

Initially half of the gaming tax money would be dedicated to the redevelopment of Atlantic City. It’s expected to be around $200 million a year for at least seven years to offset the loss of business to in-state casinos. That percentage would decline over a period of years. How that money will be distributed and to whom is not outlined in the bill.

One more hurdle remains for the bill before it reaches the ballot. Because the agreement was reached after the 2015 session ended, passage will require a super-majority of at least 60 percent of the legislators. Most observers believe that won’t be difficult since Democrats dominate the state legislature and North Jersey Republicans are also in favor of the referendum.

“It is foolish to think that gaming in North Jersey would do anything but cannibalize an already-saturated market in the same way that casinos in Pennsylvania, Delaware and Maryland have cannibalized ours,” said Atlantic City’s state Senator James Whelan.

Although Hard Rock International and the Meadowlands released a poll showing most New Jersey voters in favor of gaming expansion in North Jersey, most objective polls showed stiff opposition. An anti-expansion campaign should bring together some strange bedfellows like the casino companies in Pennsylvania and New York along with the Atlantic City casinos, as well as the typical anti-gaming activists.

Meanwhile, state Senate President Steve Sweeney introduced a bill that would take over most of the functions of the Atlantic City government. Although there has already been a financial monitor in place, as well as a state-appointed emergency manager, Sweeney says this will be a takeover on “steroids.”

“This is a very clear statement to Atlantic City,” said Sweeney. “Get your act together. Knock off the B.S. and start addressing what you need to address.”

“Certainly no one was lost or killed,” Guardian told NJ Advance Media. “But certainly, it was that kind of a surprise to me.”

“There is extreme Atlantic City fatigue in this statehouse,” Sweeney said. “My colleagues—every time we talk about doing something for Atlantic City now, they’re tired of hearing it.”

The legislature just approved a bill that would impose a set annual fee for each casino—“payment in lieu of taxes” or PILOT—allowing the casinos to escape constantly escalating property taxes and the city to avoid tax appeals. But at the last minute the casinos’ PILOT amount increased to avoid soaring property taxes for businesses and residents of surrounding Atlantic County.

With all these developments, 2016 is shaping up to be a busy year for Atlantic City and New Jersey.