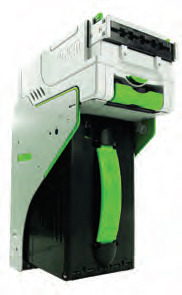 Cash acceptance equipment supplier JCM Global announced that Casino MonteLago at Lake Las Vegas, which held its grand reopening May 26, is equipped with the company’s “iVIZION” bill acceptors on 100 percent of the slot floor.

Casino MonteLago is the latest in a string of exclusive orders for JCM’s iVIZION, and company officials say several more will be announced in the coming weeks. The iVIZION acceptor is the foundation of what the company calls “intelligent validation” in banknote acceptors.

“We carefully considered every available product for the grand re-opening of Casino MonteLago,” said Jon Berkley, CEO of MonteLago parent Intrepid Gaming, “because we wanted to make absolutely certain we had the very best equipment in place to help the casino succeed. One look at iVIZION, and the decision was quickly and easily made.”

“iVIZION was built to be the foundation of intelligent validation, meaning that it can grow with a casino,” said Mark Henderson, global vice president of sales for JCM. “That is just one of the many reasons iVIZION was perfect for Casino MonteLago, and we are thrilled to be playing a part in its grand opening and in its continuing success.”