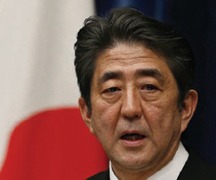 Prospects for the legalization of gaming in Japan increased substantially last month when the Liberal Democratic Party of Prime Minister Shinzo Abe scored an election victory. The LDP has long been the biggest proponent of gaming in Japan, and after the election it now controls both houses of the Diet, the Japanese legislature.

This kind of dominance in Japanese politics has not occurred since 2007, and should endure through 2016. The LDP has put forth an aggressive program of economic reform—including the legalization of gaming—and will now be able to approve it with little opposition.

In a conference call on the company’s second-quarter earnings, Las Vegas Sands Chairman and CEO Sheldon Adelson noted the results. He said LVS has been lobbying for Japanese casinos for the past five years, but with no party in control, there was little consensus on the issue. Adelson said he expects the LDP to introduce a gaming legalization by November or in 2014 at the latest.

The election results should also launch lobbying efforts by Japanese cities that want to host a casino. With Tokyo and Osaka the front-runners, other cities would have to line up support of the legislators who will write the bill.

“We gather that Japan is modeling its gaming expansion based on the Singapore integrated resort model more so than on any other international gaming jurisdiction, which is to say that a major purpose of gaming expansion in Japan will be to drive inbound tourism via large IRs with significant amounts of non-gaming space,” the firm said in a recent client note. “For this reason we believe that the two incumbent IR operators in Singapore are the odds-on favorites for the two likely ‘prize’ locations.”

“We believe Genting Singapore’s RWS along with Las Vegas Sands’ MBS are the baseline models for Japan,” the firm said.

“We think the return to power of the (Liberal Democratic Party) improves the likelihood of gaming expansion being passed this fall, although we readily admit that gaming expansion is not a foregone conclusion,” the firm said.

The key hurdle at this point is upcoming elections to the upper house of the Diet, where the LDP is looking to wrest a majority from the opposition Democratic Party of Japan. With the LDP’s power solidified, draft legislation could be introduced as early as this fall to decriminalize casinos, followed by a bill to establish a regulatory framework.

“This would then be followed by RFP processes that could conclude as early as mid-2015,” the firm said. “With a minimum three-year construction period, we think mid-to-late 2018 is the absolute earliest potential opening date for an IR in Japan in a best-case scenario.”

UGRM expects at least two licenses, one each for Tokyo and Osaka, with a handful of licenses issued for smaller venues in regional locations. Economically disadvantaged Okinawa and tourism-dependent areas such as Hokkaido will likely be included to secure political support for the central government’s pro-casino caucus.

Slow Down And Relax

With Japan’s long history of flirting with gaming legalization and then backing away, Ben Lee, the managing director of iGamiX Consutlancy, says the good thing about the recent election is that Abe beat the one-year jinx, which has snared the previous five prime ministers, causing them to leave office one way or another before a year in office.

“But gaining control of the upper house of the Diet was very significant,” says Lee. “This is encouraging, but he now must avoid a groundswell of opposition from the general public as he attempts to amend the constitution. This is not a simple proposition; it involves an entire raft of rights that affect the public, which is now becoming aware of what’s happening. There are some grassroots queries that are beginning to question what he’s trying to do. This is much more important than this pesky little issue of casino gaming.”

Lee says the gaming issue has a very low profile in Japan and isn’t considered that important.

“You have a very high profile outside of Japan,” he says, “because it’s being fanned by the lobbyists and the public relations experts from the gaming companies, but inside Japan it’s not that visible.”

And Lee says the procedures that must be followed leading up to any legalization of gaming, as well as a bidding process and the granting of licenses, is also daunting.

“This would take five years, at the very minimum,” he contends.