It is not a foregone conclusion that casino gaming will come to the Land of the Rising Sun. 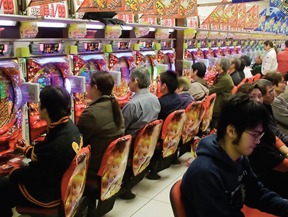 With eight prime ministers in seven years—the current being a recycled prime minister, Shinzo Abe—the eternal hope that gaming in Japan is inevitable must be weighed in the following light.

Lobbyists on behalf of Western gaming companies regularly cite that the annual revenue derived from the pachinko industry is between US$240 billion and $380 billion, but they do not explain that this refers to the amount paid for “steel ball rental,” or in gaming parlance, the “drop.” The real amount of revenue received is 10 percent of that, representing 5 percent machine take and 5 percent conversion commission (conversion of the steel balls back to prizes and eventually cash). Thus, the actual revenue is between $25 billion and $38 billion—but again, some caution here, as most analysts assume that these figures would translate into actual gambling revenue.

According to Japanese researchers, pachinko is both a form of leisure and a gambling activity. Pachinko activities are acknowledged as a unique Japanese form of stress relief in which the individual indulges to find personal psychological space. And yes, there is still that gambling element there as well, although no research to date has quantified the split between these two types of behavior.

‘This Year Will Be The Best Chance Yet’

Already, this well-worn mantra is being cranked up again, recently by Genting and the casino lobbyists pointing to Abe’s re-election and the pro-business LDP regaining power. It may be worthwhile pointing out that when Abe was PM in 2006-2007, he did not advance the casino issue. Right now, Abe’s priority, apart from ensuring that he lasts longer than one year, is a much bigger hot potato—to change the Japanese constitution.

Abe’s LDP currently controls the Lower House of the Diet, and he needs to gain a two-thirds majority of the Upper House in the forthcoming mid-year elections to be able to push the issue to a public referendum. Assuming he succeeds, he will then have to convince the public that the country needs to ditch its pacifist ideals before he can move on to something like promoting casinos.

We do not envisage that this will happen until probably sometime mid-2014, assuming it all goes to plan and Abe beats the one-year jinx.

The whole casino initiative is broken into two parts: the IR Promotion Law, and the IR Implementation Law.

Drafted by the IR-Giren (a bipartisan group of congressmen), the first law merely lays out the political road map to drafting the second law, and the anticipated time frame for achieving that is two years from the enactment of the first. It’s anybody’s guess, however. Given the history, one would need to be circumspect about any time frames suggested.

The time frame for passing the first law itself is unknown. However, in earlier presentations at gaming conferences, the pro-casino academics hinted at an overall time frame of five years purely for the legislative process.

The latest news released by GamblingCompliance reported that yet another new IR committee has been formed, this time by the new ultra-nationalistic Japan Restoration Party. Notably, the IR-Giren has not convened any formal meetings since the beginning of this year due to the loss of its chairman, who was not returned at the recent election. Additionally, the office holders in this new IR committee are former officers of the IR-Giren, so it sounds like apart from a loss of impetus, the issue may now have been taken over by the ultra-nationalists.

What investors have been told repeatedly is that the ex-governor of Tokyo, Shintaro Ishihara, and the mayor of Osaka, Toru Hashimoto, are both strong supporters of the casino initiative, but what has been conveniently ignored is the fact that both these politicians can only be euphemistically described as holding extremely colorful views on most foreign cultures, in particular the U.S.

Ishihara co-authored the book The Japan That Can Say No together with Akio Morita, founder of Sony, and The Voice of Asia with the former prime minister of Malaysia, Mahathir Mohamad. They would certainly not be predisposed to having any U.S. companies come in and control a sunrise industry.

Ishihara is also well known as an unrepentant ultra-nationalist who maintains that the 1937 Nanjing Massacre never happened and was the Tokyo governor who personally escalated the Diaoyu/Senkaku island conflict between China and Japan when his proposal to buy the island from the private owner forced the Japanese government to step in. Incidentally, Ishihara and Hashimoto are the co-founders of the Japan Restoration Party and are both initiators of the constitutional amendments proposed by Abe.

Most importantly, the pachinko industry, the single largest service industry, which is estimated to be 75 percent controlled by Japanese Koreans, may have been in favor of the advent of casino gaming if they are to be given a slice of the action. However, we have long been aware of “advice” given to the global gaming companies seeking to position themselves in Japan—advice that stated that “the Japanese government would not look kindly upon any casino bids that include any form of partnership with Japanese Korean pachinko companies.”

Japanese Koreans have long been subjected to the same outspoken discriminatory views from Ishihara, which included derogatory descriptions of them as third-world nationals.

The industry would certainly gather its massive lobbying resources (the pachinko industry has often been referred to as the Japanese police pension fund due to the fact that a high number of retired police officers often end up with cushy jobs there) to fight this casino initiative if there is a risk that they too would be excluded.

In short, investors could expect a time frame of much longer than a mere five years for this to play out, particularly if the ultra-nationalists were to say no to the incumbent 500-pound gorilla already in the room with them.