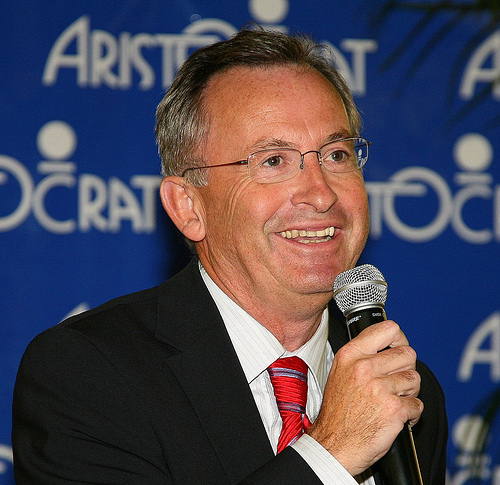 The release of the half-year results for Aristocrat Technologies was the occasion for a discussion with the company’s managing director and CEO, Jamie Odell. Like all the other companies in the slot manufacturing sector, Aristocrat is struggling to increase sales in a world where the economic downturn has reached its second year. Odell says the North American market remains the primary target for the company, with expansion and an expected slot replacement cycle soon to start. He spoke with Global Gaming Business Publisher Roger Gros by phone from his offices in Sydney in September. For a podcast of the full interview, visit www.ggbmagazine.com and click on the GGB Podcast button.

GGB: How do you feel about your earnings report for the first half of 2010?
Odell: We’re very excited about the great results we had in North America, which is by far the most important market for our company. As you know, we have some challenges in some other markets, such as in our home market of Australia right now. But a lot of our emphasis has been on North America. Our new wide-screen product has been well-received there. We’re pleased with our growth, but it is still a very constrained market. We’ll take an increased market share, however, while we wait for a broad market recovery.

You joined Aristocrat in February 2009, so you must have had time to really understand the company and its relationship with its customers. Are you pleased with the progression of the company?
It’s a fascinating industry, and it took me a while to really appreciate all the aspects of it. But I feel I’m right up to speed now. I think what we’ve done right in the last 18 months is to really focus on the games and the technology behind them. We know we want them to be fun to play and have them work for the operators. We spent a lot of time in our technology and game studios in North America. We have one in Austin, Texas that is helping us build the platform because of the quality of technology we find down there. And we added a couple of creative studios in our Las Vegas office because we recognize that the American gaming market is unique and is usually the first adopters of new technology. Historically, we’ve developed most of our games out of Australia, but that’s no longer going to work for us in the North American market. We need to get closer to our customers.

We’re also bringing more gaming talent to our board. We recently signed up Steve Morro, who is a great guy with a lot of American gaming experience. He adds real value to the company.

How has the latest Viridian platform worked for the company?
We’ve had that out for about six months now, and it’s performing very well. We talked to a lot of players and operators about what they wanted and we built to their specifications. We changed the cabinet, the buttons, how the screen sat and other things. And it has resulted in more play.

The other product we’ve recently put on the floor is Verve, which was entirely designed by our North American team. It’s a participation platform, and the first game based on Michael Godard’s art is just getting into the market now. It looks sensational, and we expect it to perform very well.

Last year you told us your ship share was up substantially. Has your market share followed?
Yes, we gained a couple of points in the last few months, which is very encouraging. And we never take that for granted.

How about your themed games? We know JAWS is doing great business in the U.S. market.
Yes, we plan to do more of that. JAWS was a great learning experience for us. It helped us to develop a fully themed game. There’s certainly more that we will do in that space.

At the same time, we’re trying new things like the Godard theme with the “Rockin’ Olives.” That’s a new concept that we think will be very popular, rather than just going for the TV and movie themes.

And we’ll continue to develop our core games like Mr. Cashman, which has been a great product for us over the years in North America.

We plan to be more diverse in our product offering. We may have been a bit one-dimensional in the past so we have to expand into new places while always remembering the core product that made us great.

The replacement cycle always seems to be six months away and then when you get there the horizon has moved another six months. Any hope that we’ll ever get there?
I agree with what most of the experts in our business have said. First it was supposed to kick in in late in 2010, but most likely in 2011. It seems to us that it will start in late 2011 and then hopefully for the entire year of 2012.

But it’s a question of when not if. Some of the machines in the U.S. are getting to be 20 years old. That’s just not sustainable and not good for anyone. But it’s just a reflection of the tough times the American economy is going through right now. These factors are outside of the industry’s control so all we can do is wait and prepare for the rebound by having great games and systems ready to go.