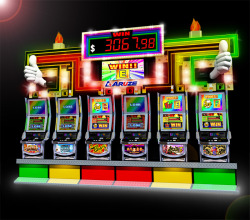 Aruze is famous for this game in many parts of the world. Using a variety of base games, a bank of networked slots is offered with a random, automatic tournament function.

Players have been drawn to this game because of the presentation, featuring giant, three-dimensional gloved hands jutting from an overhead display, moving around to indicate that a tournament is beginning.

The base games are all multi-line video slots in various payline configurations, each game available in penny denomination with either a one-credit-per-line or half-credit-per-line wagering setup. The networked banks are available in groups of six or 10 machines. Players have to cover the paylines and wager an ante to qualify for the community tournament.

When the random tournament feature is triggered, the regular screens disappear and are replaced by a special set of reels with a single payline. During the tournament, players receive points for symbols landing on the payline, and points are deducted for symbols bearing a “minus” sign. The top three scores at the end of the tournament receive cash prizes.

Base games include popular Aruze titles such as Shen Long, Legend of the Qin Dynasty II, Magical Cat and Kyoto.

Graphics and sound-and those big hands-are designed to capture player attention. When a tournament is triggered, a countdown commences as an announcer encourages qualified players to get ready for the contest.