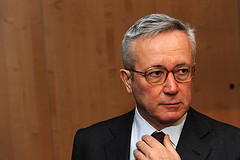 An Italian Senate commission is set to debate yet another expansion of the land-based gaming industry.

GamblingCompliance reports that the new offer includes 7,000 new betting outlets and more slot operator licenses. As a counterweight, the measure also contains more control regarding online gaming sites based outside the country.

Faced with budget cuts of €43 billion, Economy Minister Giulio Tremonti (l.) has outlined plans for a new round of slot license tenders by September 30. The betting outlets would come at the end of October.

Tremonti expects existing slot operators to pay around €435 million to renew their contracts, which expire this year. The breakdown is €100 per machine for each of the 350,000 AWPs, plus another €100 million in additional fees.

The new operators of slots and VLTs businesses are expected to add another €400 million to the total.

The government expects €115 million from an additional 2,000 betting shops, some of which will be replacing approximately 1,000 shops with licenses expiring in 2012, and 5,000 corner outlets in existing retail businesses.

One thousand low-stakes poker club licenses will be tendered starting in November. The bidding for a nine-year license will begin at €100,000. The clubs will operate with a range of minimum and maximum stakes. Taxes will be 3 percent of turnover.

On the other hand, the government is looking to go rougher on companies that are based abroad or are otherwise ignoring the laws.

Operators with gaming machines disconnected from the central monitoring network will be fined minimum €5,000 for each instance. That is five times the current penalty.