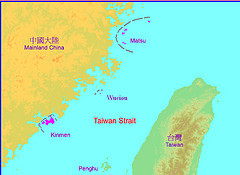 The government of Taiwan has begun a series of presentations on the new casino bill in the three potential jurisdictions.

GamblingCompliance reports officials from the Ministry of Transportation and Communi-cations have scheduled meetings for the Kinmen, Matsu and Penghu island groups, which were designated eligible for casinos in the original gaming act passed in 2009.

Local input is crucial to the success of the effort, as approval for gaming requires passage of a local referendum. In 2009 Penghu voters rejected casinos, sidelining gaming for at least three years there.

After the defeat of gaming on Penghu, the casino issue went quiet. However, the overwhelming success of the integrated resorts of Singapore breathed new life into the matter.

The government is expected to issue only two licenses at first, valid for somewhere between 10 years and 30 years, according to an article from AFP. The article also said that a second round of licensing would not occur before 15 years.

As reported by GGB News last month, the government would collect a franchise fee of NT$3 billion—about $102 million—and a three-year license fee of NT$200 million.

Gaming tax is expected to be between 12 percent and 15 percent. However, the combined result of all fees and taxes could put the effective rate close to 40 percent.