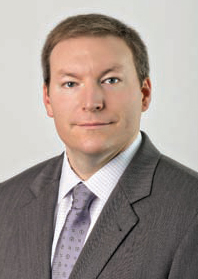 Shortly after his April arrival at J.P. Morgan as Managing Director and Head of Gaming, Kyle Bender led a team that advised and provided financing for the announced acquisition of Caesars Entertainment by Eldorado Resorts.

The deal was just the latest transaction for the Los Angeles native since he graduated from the Wharton School at the University of Pennsylvania in 2003. Penn exposed Bender to investment banking and the skills needed for his career choices, which started when he returned to Los Angeles after graduation.

“I began as a generalist at Banc of America Securities but joined the gaming investment banking team about six months in. I have dedicated most of the last 16 years to covering the sector,” he says.

As an analyst, Bender faced a challenge during the financial crisis in 2007 and 2008. His team at Banc of America relocated to New York, so for him to continue covering gaming in Los Angeles, he moved to UBS Securities. From UBS, he joined Jeffries & Company for two years, followed by more than six years with Macquarie Group.

In terms of his progression, Bender took time to get the transition right from execution responsibilities to client management. “It takes a different set of skills to be successful in client management,” he says.

Early in Bender’s career, his focus was on deal execution—making sure things got done.

“In my current role as a sector head, most of my energy goes into developing and maintaining relationships with companies, generating financing and advisory opportunities and managing a team of talented people. It’s my responsibility to deliver J.P. Morgan’s capabilities and first class advice to our clients,,” he says.

One of the lessons Bender learned over the years is that reputation is very important.

“Gaming is a small industry, so if you have a poor reputation, that can follow you around.”

For Bender, the most interesting evolution to watch revolves around the growth of legal online gaming. As states roll out mobile sports betting, there is a good chance it could normalize digital gaming and lead to more states going full online as exists in New Jersey, he says.

“I don’t believe this will replace land-based gaming, but rather act as a complement and player development mechanism,” he says. “The rollout of expanded gaming is already leading to some exciting business relationships between casino operators and leading betting companies.”

Now a veteran analyst, Bender has his ideas on how novices can succeed. Most important? Develop and maintain relationships with senior team members at the outset of your career.

“In my experience, if you work hard and contribute to your team’s success, the people you work with are likely to take an active interest in your career development,” he says. “I remain close to many of the people who supported me when I was a young banker.”