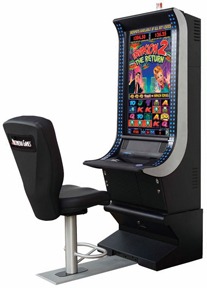 This is a much-anticipated sequel to Multimedia’s popular Invasion From Outer Space, and like the original, it is a mix of funny animated alien sequences and nods to campy 1950s sci-fi films. (As they did with the first game, Multimedia’s designers tapped the manufacturer’s own employees to portray screaming citizens fleeing from flying saucers.)

There are several mystery wild features, multipliers and free spins built into this theme. Primary game features include stacks of wild symbols, “Tractor Beam Wild Reels,” and a mystery feature in which a robot randomly appears to “zap” the win meter with a laser beam, revealing a multiplier of up to 10X.

The main event, called the “Invasion Bonus,” awards five picks with the goal of destroying a fleet of aliens. Picks reveal credit awards, multipliers or additional picks along the way. In the free spin bonus, players are awarded 10X for four free spin symbols, or 50X for five symbols. The free spins continue, with each win multiplied by 10 or 50, until a “Zap The Alien” symbol appears on reels 1, 3 and 5, awarding a prize of 300 credits per line and picturing two identically cloned townspeople.

The player picks one, who is zapped with a ray gun to reveal whether it is human or alien. If you pick the alien, the free spins resume, continuing up to a possible total of 175 free games.

Finally, there are two “Must Hit Jackpots”—progressives guaranteed to hit by certain levels. In this case, one jackpot must hit by $50 and the other by $400. Player excitement builds as each meter approaches the Must Hit level.