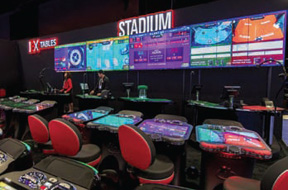 Electronic table game supplier Interblock announced a corporate partnership agreement with Penn National Gaming, under which Penn National will install the Interblock suite of ETGs at more than 20 properties of the company’s portfolio across the United States.

Interblock also announced a major installation of a 100-seat ETG stadium at Resorts World Manila in the Philippines.

The Pennsylvania agreement, which includes installations of electronic blackjack, baccarat, craps and roulette, guarantees Penn National exclusivity on newly released products. The games are included in a variety of formats from stand-alone automated and video units to bar-tops, live and/or automated stadiums, and Interblock’s integrated Pulse Arena product, which presents a variety of games in a nightclub atmosphere.

The Diamond Stadiums are completely customizable to work with each casino’s unique floor plan and customer base. An unlimited number of play stations can be connected to a single table or generator, providing operators with an effortless way to generate revenue while simultaneously reducing operator expenses.

In a separate release, Interblock officials say the Resorts World Manila (RWM) integrated resort is live with a 100-seat configuration of the Diamond Interblock Stadium.

The Diamond Interblock Stadium at RWM consists of 100 play stations with 27-inch monitors connected to two live baccarat tables, two live roulette tables and a BigSix Super Spin wheel. The BigSix Super Spin game is exclusive to the property, and features a bonus in which players have the chance to win up to 1,000 times their bet.