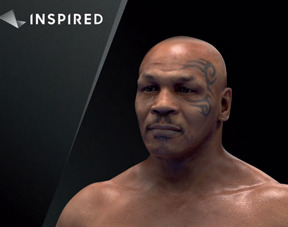 Look out, G2E—Mike Tyson is in the house.

No one knows if the former heavyweight champ will make an appearance at the Las Vegas trade show this year, but he’ll be there in spirit—and via his digital avatar in Inspired Gaming Group’s new virtual boxing game.

The lifelike betting experience is designed to make players feel they’re ringside at a title bout with Iron Mike. Rush Boxing will feature Tyson, going toe to toe with the great sluggers of the past. The game is reminiscent of a plot device in the 2006 film Rocky Balboa, in which the fictional Philly champ was pitted, in a virtual reality showcase, against Mason “The Line” Dixon, a young pug from a newer generation of heavyweights.

In Rush Boxing, the rounds are vivid, entertaining, and can rival a genuine title fight for sheer fun and excitement, says Luke Alvarez, CEO of London-based Inspired Gaming.

“We create ultra-high-definition, extremely lifelike graphical events that look and feel like a boxing match, a soccer match, a NASCAR race or basketball game,” says Alvarez. “These days, the graphics are so good, Virtual Sports are almost indistinguishable from the real thing.”

Importantly, the products are adaptable to different jurisdictions, with outcomes generated from “a pure fixed-odds RNG, a lottery-style central determination results generator—whatever the regulation demands,” Alvarez explains. “Part of what’s special about what we do is that every race and match is new and every outcome is unique.”

Inspired Gaming Group, one of the world’s leading providers of server-based gaming products, is an originator of the Virtual Sports category. In addition to Rush Boxing, at G2E the company will introduce two other new games under its Rush brand, Rush Stock Car Racing and Rush Basketball, designed just for the U.S. market.

For the boxing game, the company signed a multi-year licensing contract with Tyson. The ultra-high-definition imagery was based on proprietary video footage of the champ in action, shot right in Las Vegas.

Inspired launched its Virtual Sports category at the turn of the millennium, and has since cornered the market it helped to create.

“It’s a new thing in the United States, but we’ve been doing it in U.K. since about 2002, when we started in betting shops with horse racing,” says Alvarez. “Now we broadcast hundreds of sports every day: horse racing, virtual soccer matches, virtual greyhound races, car races, and so on,” in about 10,000 betting shops every day in the U.K., 7,500 betting shops across Italy, and 6,000 lottery shops in mainland China.”

All told, the Virtual Sports line, which continues to add new titles, is available at 50,000 betting and lottery shops and casinos around the world, along with 300 web and mobile sites. The category generates an impressive $10 billion in handle per year in about 35 countries; in Italy alone in 2014, Inspired’s Virtual Sports products generated more than $1.5 billion in the first year, dominating 95 percent of the Italian virtual sports market.

In the last year, Inspired has also launched its Virtual Sports line in new markets including Georgia on Adjarabet’s website, in Kazakhstan with Olimp across online and retail, and in Belgium with the Circus Group’s online and mobile platform.

In China, Inspired’s Virtual Motor Racing game “Lucky Racing” is the most popular lottery product in Hunan, and is available in more than 2,000 lottery shops in the Hunan Province. In addition, its Virtual Football or “e-Ball” game is live in more than 3,000 venues in Jiangsu Province, the largest sports lottery province in China. Inspired also recently signed deals in the Philippines and Colombia, and is looking to grow in AsiaPac and Latin America.

Bringing the games to the United States is significant, says Alvarez. “We’re going to make a lot of noise about it at G2E,” he says. “After a few years of discussion, the Nevada Gaming Commission has approved virtual sports as a regulated category of events, so we’re working on going live in Nevada sports books in 2016. We’re also optimistic that we’ll be going live in New Jersey and other North American jurisdictions as they come on stream, both land-based and online, over the next 12 to 18 months.”

It’s a good bet, as virtual sports accounts for an increasing percentage of bets in established markets, according to Phil Katsaros, Inspired’s head of business development for the Americas. “For instance, 20 percent of all bets in Italy and 10 percent of bets in the U.K. are now on virtual sports, and this figure is growing,” Katsaros has said. “We’ll look to replicate this success in North America.”

Virtual Sports is a growing channel, and for good reason: with the technology, fans no longer have to wait until Monday night or Saturday afternoon to enjoy their favorite pastimes; they can tap into a game, a match or a race at any time, in almost any location—from a favorite betting shop to a laptop computer to an iPhone or Android.

The U.K. bookmaker Ladbrokes, for example, which launched Inspired’s Virtual Sports in 2,500 retail outlets in 2005 and went online in 2007, has recently added Virtuals on mobile. Its Virtuals revenues have doubled since the mobile launch, the company reports.

Players today expect an omnichannel experience, available at the press of a button or swipe of a fingertip, says Alvarez. Inspired Gaming is committed to delivering that experience everywhere it is now regulated and sanctioned. The global company is also poised to integrate new markets as they open up, and also play a role in more widespread sports betting if and when it expands in the U.S.

Though Alvarez isn’t holding his breath—“People have been predicting the launch of sports betting in the U.S. for many years”—he is certainly a more than casually interested observer of the debate. “Of course if it happens, we want to be part of that.”

Since 2012, the globe-trotting CEO has focused on expanding into high-growth geographies, offering a line of “low-cost, wide-area” solutions tailored to meet the needs of large emerging markets. The campaign has been a success; according to a statement from the company, Inspired has tripled its international sales in recent years.