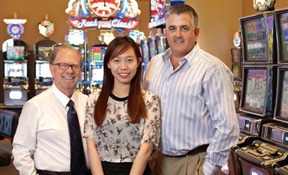 When Nevada Governor Brian Sandoval announced last year that he wanted to ensure that his state would remain the innovation capital of the gaming industry, former Shuffle Master CEO Mark Yoseloff was listening. Yoseloff, who retired from Shuffle Master (later SHFL entertainment) in 2006, had an idea that would help to reach that goal.

“As the CEO of Shuffle Master,” Yoseloff, who himself holds more than 100 patents on gaming products, said, “I met a lot of people who had ideas—many were not even part of the gaming industry—and didn’t know what to do with them. We couple that with the fact that the industry doesn’t know how to attract younger gamblers, 21-35 years old. There’s not enough product in the casinos that appeals to them.”

As a trustee of the University of Nevada, Las Vegas Foundation, Yoseloff envisioned a project that could potentially solve that problem, as well as benefit the university.

“I had this notion that there were many students who had ideas but didn’t know what to do with them,” he says. “So I proposed to the university that we offer a course for gaming innovators. You can’t train someone to be inventive but we can take inventive people and train them in what they need to do to go from an idea to a product in a casino. That was the course we offered last fall.”

Yoseloff’s Family Charitable Foundation donated $250,000 to launch the class, and also got initial funding from a program set up by Sandoval’s administration called the Knowledge Fund, created by the Nevada legislature in 2011 and funded in 2013.

With that money, Yoseloff has set up the Center for Gaming Innovation, which will reach far beyond the walls of UNLV into the community.

“The purpose of grants from the Knowledge Fund is to create educational opportunities that will add to the state’s economic growth by adding jobs or bringing revenue into the state,” says Yoseloff. “I think we were the first recipient of one of these grants. This allows us to go from a single course to actually setting up the center, where not only students, but people from the community will be eligible to come in and get help with their gaming ideas. We even have a few people who are willing to commute from out of state to take this course when it’s offered in the fall.”

The course includes how to do research for similar products, novelty searches, how to file patents, expert math advice, mentoring and more. In exchange, the students have to commit 20 percent of the future earnings of the product to the university.

The first course attracted 17 students, and everyone had a few ideas.

“Amazingly, we are in the process of filing 12 patents based on the work of these students,” says Yoseloff. “And one of these is already sold.”

“The sale of Hien’s game concept is testament to the quality of ideas being produced by our students,” says Yoseloff. “That this sale took place less than nine months from the commencement of the Gaming Innovation Program is truly gratifying.”

An undergraduate, Nguyen will return to school next semester and plans to build on her success by inventing more successful games.

“I am so excited to be able to sell my invention and can’t wait until others are playing my game,” Nguyen says. “I never thought this would be a possibility for me and I’m so thankful for the support of Dr. Yoseloff and UNLV.”

• 888 Baccarat: Invented by UNLV Hotel College graduate He Lin, who won second place and $2,000 in the gaming innovation competition. The game is a new, non-commission baccarat taking into account elements of Chinese culture.

• Delayed Wager Increase in Video Gaming: Created by UNLV employee Gael Hancock and David Downes, a UNLV graduate of the master in hospitality administration program. This is a feature applicable to any reel slot machine, which permits the player to change his or her wager after two or more of the reels have stopped spinning.

• Color War: Created by UNLV Hotel College student Young Gi Lee, this is a new, easy-to-play specialty table game based on the color (red or black) of the cards dealt to the player.

• Flip Card Blackjack: Created by UNLV Hotel College student Aron Kock, this is a game in which a card is dealt face down under the side the wager when the player receives a blackjack. The winning odds for the side bet are determined by the value of that card.

The Konami Corporation has been a longtime supporter of UNLV, providing philanthropic donations and employee participation. But Tom Jingoli, Konami’s chief compliance officer and senior vice president, says the purchase of Nguyen’s game was simply a commercial venture.

“It is exciting to witness the university encouraging its students to hone their talents and market their ideas to the gaming industry,” says Jingoli. “In this case, Konami’s interests were purely commercial, and we are optimistic about the financial partnership we have forged around this innovative gaming concept.”

The Gaming Innovation course will be offered again at UNLV next fall, says Yoseloff, and this time it’s open to members of the community, and not just to UNLV students.

“We expect the program this year to be very much in demand,” he says, given the success of the first class.

The UNLV William F. Harrah College of Hotel Administration is getting increased accolades from the community and the industry as it expands its reach. Just a few months ago, it was announced that Konami had donated $2 million for the construction of Hospitality Hall, an academic building for the college.

Las Vegas Sands recently added a $7 million bequest to get that building much closer to its $20 million goal in private funding (in addition to $30 million in public funding). In 2010, the Caesars Foundation provided $2.5 million to drive the project’s initial planning, with the state providing additional funds during the last legislative session. UNLV expects to present a public funding request during the 2015 legislative session, which could lead to project completion in late 2017.

“We are setting the global standard in hospitality and gaming education and development of the industry’s future leaders and scholars,” says Stowe Shoemaker, dean of the Hotel College. “These endeavors are vital for continuing UNLV’s leadership and building an environment that enhances the learning styles of tomorrow’s students, creating a truly global classroom.”

Another innovative program produced by the Hotel College is the “Conversations on Leadership” series, which will be a hallmark of the new center for executive entrepreneurship at the William F. Harrah College of Hotel Administration. The proposed center is being funded through a multimillion-dollar gift from Las Vegas Sands Corp.