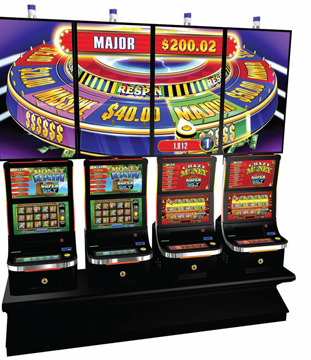 Chicago-area manufacturer Incredible Technologies is one of the fastest-growing slot suppliers in the business, and its path from pure amusement-game manufacturer to slot manufacturer has been meteoric—and methodical.

The latter point is more important, because it points directly to the reason the young slot-making division of this well-known amusement-game company has been able to quickly establish long-term relationships in a casino business that now extends to 23 states and numerous tribal jurisdictions.

Most slot manufacturers bring new games directly from the R&D lab and/or state approval process to the floor of the Global Gaming Expo and other trade shows. Incredible Technologies makes their games prove their worth first.

Incredible Technologies had been in the business of amusement arcade games since 1985—it is the largest U.S. manufacturer of coin-operated amusement games, its most well-known being the legendary tavern and arcade game Golden Tee Golf. Its methodical approach to translating that expertise to the gaming market began well before the company logged its first display of products at Global Gaming Expo in 2012.

By the time of that show, the company had already collected a dozen state gaming licenses, with hundreds of units in the field. The games it brought to its first G2E were already proven earners.

It’s been that way ever since. The majority of games IT brings to the G2E show are already in the field, and when the company launches a new platform, new cabinet or new progressive, it is done with those proven titles as base games.

“That’s something our company stands behind in a big way,” says Daniel Schrementi, vice president of gaming sales and marketing for Incredible Technologies. “Because we don’t have Wall Street to impress, we don’t need to frustrate our customers by showing them something they want only to find out it’s not any good. Everything has to go through the test bank, and then it’s brought to a show.”

Games like Crazy Money, King of Bling, Money Rain, Big Prize Bubble Gum Deluxe and others have become sustaining brands in themselves, and in many respects, the models for subsequent games. They show how the company maximizes the return from the brands, play mechanics, bonus events and reel icons players have already embraced.

“When we launched Infinity Skybox last year, we didn’t forecast the type of growth it ended up having,” Schrementi says. “It’s neck-and-neck for the No. 1 participation game on most operators’ floors; it’s quickly become a must-have product.”

This year, the company makes that multi-game “billboard” into a single display tied to the base games in a bank.

Infinity Super Skybox leverages four side-by-side 55-inch Infinity Skybox displays to create a single, 123-inch wide-screen display, linked via a controller to all the base games as a common bonus screen. Shrementi says the efficiency of the system saves customers money—no separate bonus screen or sign packages are needed.

As always, the games launching the new linked bonus game on Infinity Super Skybox will be from IT’s most popular game series, what’s known as the “Money Family” of games, all of which use the same reel icons—cash, in various denominations, with the presidential or Founding Father portrait from each denomination playing starring roles.

All of them also have the second-screen bonus event inspired by the original game in the brand, Crazy Money—the “Money Catch Bonus,” in which players touch the screen to “grab” flying dollar bills, revealing credit values behind each bill.

The games and bonuses are fun and easy to understand, which has earned the brand an enthusiastic following.

“We have capitalized on players understanding the original Crazy Money, and we utilize different twists on that brand as we launch new cabinets,” says Caitlin Harte, marketing manager for Incredible Technologies. “The base game play is recognizable. Players are comfortable sitting down.”

You guessed it. The Super Sky Wheel spins across that big 123-inch display.

The base games retain all the features of the originals, but during that trademark Money Catch Bonus, players can grab an icon that will win spins on the Super Sky Wheel, which is actually two concentric wheels—the outer awarding a credit award or one of five progressive jackpots, the inner awarding extra spins of the big wheel. “It’s possible to win two progressive jackpots on one wheel-spin bonus,” Harte says.

The company also will launch new games for the surging Infinity Skybox platform, from the same familiar game family: Crazy Money Deluxe and Money Rain Deluxe, each with the original “Sky Wheel” display in the tall top box, yielding credit awards, re-spins or one of four stand-alone progressive jackpots.

At G2E, IT also will debut two new dedicated game families for Infinity Skybox—“Sky Ball” and “Sky Reels” will be added to what is now the “Sky Wheel” group.

Sky Ball uses the big display to show a pinball/pachinko-style bonus game. Pinballs drop through openings in concentric circles, dropping a ball into one of three prize pockets at the bottom of the screen. Each pocket represents a progressive jackpot, and the one that fills first with three balls awards the corresponding prize.

Sky Reels transforms the monitor into a giant game-show-style prize wheel, which the player spins for credits, re-spins or a progressive.

Each of the three game styles goes to G2E with dedicated base games—the Sky Wheel is a wheel bonus on Big Prize Bubblegum Deluxe, another adaptation of a successful IT title. Sky Ball launches with Big Heist Jackpot as a base game, and the dedicated game for the Sky Reels format is Heat ‘Em Up.

Heat ‘Em Up uses the expanse of the 55-inch vertical monitor for an expanding-reels bonus. With the “Heat ‘Em Up” feature, the bonus trigger unlocks the “Sky Reels” to expand to up to six additional rows, doubling the number of paylines to 60. The horizontal wheel in the middle spins to credits or “Power Up” spots that increase the credit levels.

The new game formats will be accompanied at G2E by dozens of high-performing titles in IT’s core Infinity U23 format, which raised the bar for the quality of all the company’s games when it was launched two years ago.

“For high-limit games, we’ve got a good strategy of taking our proven stuff and graduating it up to other categories,” says Schrementi. “Crazy Money and Money Rain were pillars in the high-limit rooms with a program we started last year. We’ve now upgraded to a game called Money Roll. Those are purpose-built, high-limit math models. They’re not just restricted versions of the other titles.”

Finally, the company this year expands its popular Infinity Link progressive product, with the new game Leonidas II. This sequel to the popular Leonidas linked progressive product features two-game banks under a common LCD “Epic Progressive” display. The brand has gained a lot of popularity with slot fans on YouTube, which has logged more than 500,000 views of the original Leonidas game.

The three-level linked progressive is won through the “Epic Progressive Bonus,” a video-game-style bonus. (Think Medal of Honor with Roman soldiers.) This is added to the “Respin Battle with Locking Wilds” and the “Free Spins War with Locking Wilds.”

Schrementi says the company produces around 24 new titles a year, and shows the highest proven earners among them at G2E. There will be at least six at G2E in the different form factors. “Everything we focus on will start with the best-earning titles,” he says. “Even though we like to show the new core games, our display is always based on what they need for their floor today.”

For the future, new skill-based games are never out of the question, Schrementi says. “We are the pioneers of skill-based gaming with Golden Tee,” he says. “Online tournaments for Golden Tee have been running for over 20 years, where people can pay money to play Golden Tee in skill contests.”

As far as skill based casino games, he says, “Our ownership has said we don’t want to be first ones in that (skill-based) space. The regulations are so undefined at the moment, it’s hard to jump into it. We’re going to wait until that market finds itself. Who knows what we’ll decide to do then? We do have the expertise, and we have some very famous titles.”

One thing’s for sure, he adds: No one’s rushing into creating a game to answer the most-asked question Incredible Technologies receives from customers: Where’s the casino version of Golden Tee Golf?

“That is our most precious piece of software. We built the whole company on that game.” If it’s done, it will be when conditions are perfect, he says.

While that will come some day, Schrementi says the days are numbered in which IT is “the company that only some people knew about.”

“We were the best-kept secret in gaming for a while,” he says. “The biggest transition that has occurred is that we are no longer a secret. It’s been an exciting time, because everybody has discovered that our products perform well, and the boxes are sturdy and technically strong. They’re getting to know our company, and because of it, we’ve had record growth.”

So much so, he says, that the company is racing to keep up on the operational end, orders coming as fast as they’re filled.

It’s a good problem to have.

“Last year was a record year for the company; we doubled our placements for the year,” Schrementi says. “This year we are looking to do even more. It’s been an exhilarating time, because we’ve all been a part of it since it was nothing but an idea here at IT.

“G2E is great timing for us. We’re going in with good products, and a lot of good news.”

That, he says, is how you seize momentum.