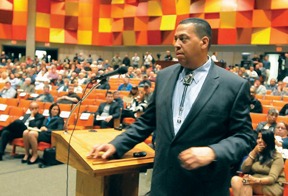 The Massachusetts Gaming Commission signaled in December that its patience with the Mashpee Wampanoag tribe’s difficulties in getting federal approval for putting land in Taunton into trust for a 0 million casino has its limits.

The commission unveiled a plan whereby the Mashpees can remain in the process, while opening the vetting process to commercial casino developers, so that the two could move forward in tandem.

Commissioner James McHugh said, “An approach one might take is to create parallel paths. If it looked like the Wampanoag casino deal wasn’t going to succeed, then the commission would be ready to move forward.” He said otherwise the Southeastern zone could be put a year or more behind the other two zones in getting a casino.

The law that authorized three casino resorts in the Bay State set aside a license for the state’s one federally recognized tribe seen as able to develop a casino. But it also left open the possibility that if the tribe is unable to proceed by August 2013, the license could be made available for other bidders.

This gives the tribe time to overcome its difficulties, including the need to renegotiate a new compact with the state, and the difficulties for a tribe recognized after 1934 to put land into trust. The U.S. Supreme Court Carcieri decision ruled in 2009 that such tribes cannot put land into trust. The Bureau of Indian Affairs rejected the tribal compact that Governor Deval Patrick and the tribe negotiated last summer because it gave the state too high a percentage (21.5 percent) of the tribe’s casino profits.

Commission Chairman Stephen Crosby noted that if any commercial developer moved forward in the Southeastern zone, it would be taking a “calculated risk.”

If the commission adopts the two-pronged approach, Southeastern Massachusetts could suddenly become the focus of red-hot competition. Members of the commission said they were worried that the state could lose out on needed casino revenue if the tribe is unable to move forward in a relatively timely manner.

Recently, Mashpee tribal Chairman Cedric Cromwell wrote to the commission say that the tribe “continues to make great progress” in its project. In the same letter the tribe claimed that state law gives it an “exclusive right” to the license, a claim that Crosby and the commission deny.