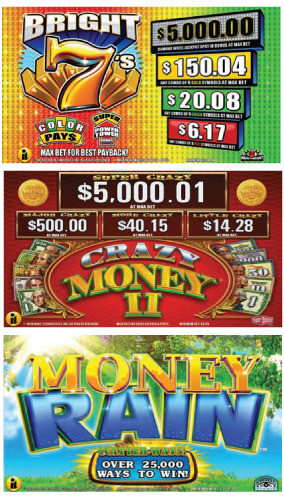 Looking at its growing success in the slot market, it’s easy to forget that Incredible Technologies has only been making slot machines for around five years.

It was well-known that the Chicago-area company, the largest U.S. manufacturer of coin-operated amusement games and producer of the legendary “Golden Tee Golf,” had engineering and creative talent. However, since arriving at Global Gaming Expo in 2012 with its first casino games, the company has convinced a lot of operators of its acumen in producing high-earning slot machines.

The manufacturer approaches the big trade show differently than many slot-makers. You won’t see untested prototype games in the IT booth. According to Dan Schrementi, the company’s vice president of gaming sales and marketing, the decision was made early on to highlight only games that are proven earners.

“We only bring proven product to the show,” Schrementi says. “That’s something our ownership lives and dies by. We are only going to bring games we know have some proven results.”

Last year at G2E, the company’s evolution from amusement to gaming manufacturer got a boost with the introduction of the Infinity U23 cabinet, a state-of-the-art dual-screen platform with built-in digital signage support, bank lighting synchronized with game events and other bells and whistles. “On the backs of that, we’ve put together our best year yet,” Schrementi says. “We’re 100 percent ahead in revenue and product placement as of July, and we expect to be even beyond that by the end of the year.”

Schrementi says scaling up to handle that increased demand has been challenging, but the effort is paying off.

The company anticipated this growth two years ago by moving into a new, state-of-the-art facility with dedicated gaming manufacturing in the Chicago suburb of Vernon Hills. However, the company’s explosive growth in Western U.S. markets, particularly California and Nevada, has necessitated partnering with a third-party manufacturer in Nevada, where Schrementi says half of the company’s casino games are now assembled.

The company will certainly need the more localized assembly going forward—a very successful Nevada field trial of its games was completed in July, and the company has lined up corporate partnerships with major operators.

IT’s rapid growth in the slot market has paralleled its evolution from amusement-game icon into a competitive slot manufacturer. Up until now, the company has succeeded in the for-sale market—“packing premium content into a for-sale box,” as Schrementi says—and that success has propelled sales in 17 jurisdictions, with the company about to enter six more at press time.

The company’s first goal in the casino market was to achieve 1-2 percent share with for-sale products, and Schrementi says the company will easily achieve that and is ready for the next step. “To get larger as a company, we need to introduce new product segments that can take us beyond that 1-2 percent foothold into the next level,” he says.

The vehicle for that journey? Infinity Skybox.

IT will launch the cabinet at G2E with Crazy Money II, a new twist of the company’s flagship game brand.

The Infinity Skybox will be flanked by Infinity Link, the company’s first linked progressive product. Infinity Link is a bank-wide linked local-area progressive utilizing the Simple Sign Display Kit with horizontal monitors and a smart controller that advertises jackpots, bonus wins and other merchandising effects.

“This will allow us to have three major segments for sale,” Schrementi says. “As a company, the ship is sailing, and we’re pushing our product to reach that 1-2 percent floor share, but now the next step is to position ourselves for growth in the future.”

He adds that the modular construction of the Infinity games will allow operators to mix and match the best IT themes, placing core games in the super-sized Infinity Skybox, or adding progressives to them with Infinity Link. “The beauty of it is that it’s built right on the foundation of our same Infinity U23 cabinet.”

The Incredible Technologies lineup for G2E will feature its most extensive display yet, with a total of 40 slot games, including 24 new titles.

At the head of the list is Money Rain, which has been the company’s runaway hit of the year. The game incorporates all the features of Crazy Money, the company’s flagship brand, and along with the sequel Crazy Money II and the fun Money Beach (picture the cash-portrait presidents with sunglasses), it will create what Schrementi calls the “Money family” of games.

All of them have the familiar game interface of various bill denominations (with super-sized smiling presidents) as reel symbols. They also all feature the popular “Angle Pay” game mechanic, which pays big when high-paying bill symbols land in certain angles, and of course, the mainstay of the theme, the “Money Catch Bonus,” in which players touch the screen to “grab” flying dollar bills, revealing credit values behind each bill.

Money Rain features an innovative reel mechanic called “Scatter Ways.” A smaller sixth reel locked during game play unlocks for the bonus to replace low-paying scatter symbols with the four highest-paying scatter symbols in a free-spin bonus. In the main game, the reels don’t spin; they flip—you know, like money.

Crazy Money II adds the Good, Better, Best bet feature, a four-level progressive and a giant bonus wheel to the original flagship product. The progressives are won via the “Mint Bonus,” which initiates a free-spin round on a bonus three-by-three reel array featuring only the top four symbols. Five or more gold coins on the reels during a free spin trigger one of the four progressive jackpots. The top jackpot resets at $5,000.

All of the bonuses are accessed through a spin of the wheel—scatters trigger the wheel to decide which of the four events will take place.

Rounding out the Money series, IT will highlight a high-denomination version of the original Crazy Money. Crazy Money High Denom features fixed-bet options and operator-selectable denominations including quarter, 50 cents, dollar and $2. “We’ve had great success with our high-denom product, which is a niche segment,” says Schrementi, who adds that the company is offering a high-denom version of Money Rain as well, designed specifically for the VIP rooms.

Schrementi says the money-themed family—all with the simple cash reel symbols, high hit frequency, low volatility and high-earning program math—has been IT’s “foundation for growth.” Part of the slot-maker’s “E Series” of games (for entertainment), it also has established the look and feel of the IT brand for players. “People are getting used to seeing our games, and these money symbols on the screen and knowing how the game’s going to play and feel,” giving IT the type of brand familiarity enjoyed by the big slot-makers.

Other G2E highlights include Big Prize Bubblegum, a nod to the childhood-favorite gumball machine. Part of the “I Series” (for innovation), the game emulates an old-fashioned gumball machine as brightly colored gumballs cascade through the reels to create big wins. Penny, nickel and dime coins landing on the reels trigger free spins in the number of the sum of the coin symbols, and free spins can retrigger up to 100 total.

A “Bonus Toy” capsule landing on a free spin reveals a 3D picking game called “Pick Until You Pop.” The player selects from 30 toy capsules to reveal credit amounts and multipliers until revealing the “toothache” symbol.

Schrementi says the game is “on fire” in the field, and could be the company’s next big hit.

Launching the Infinity Link platform will be Bright 7s, which puts a twist on standard progressive awards with a feature called “Color Pays.” The progressives are triggered when any symbols of the same color—red, green or gold, identifying the corresponding progressive—fill the screen in any combination.

The main bonus event can also land a progressive. Called “Super Power Tower,” four “mega wheels” are displayed on the screen. Each colored wheel features the chance to land the corresponding progressive or a “Level Up” slice, which moves up to the next-higher wheel. The object is to climb to the top to win the top Diamond progressive.

Finally, IT enters the haunted-house genre with Hauntsworth House, a 40-line game with cartoony animation showing different colored ghosts flying through Mr. Hauntsworth’s manor. Randomly during the primary game, ghosts will float to the reels to turn symbols into wild symbols.

Schrementi says having three new product segments will allow further evolution as a slot-maker, including the introduction of recurring-revenue products at some point to accompany the for-sale library. “No gaming company has really ever made it without having some sort of leased product,” he says, “but for us to get to the next level, we need to be able to offset our for-sale line with a premium line—whether it’s purchased or leased.”

And, of course, the company’s executives are watching closely as Nevada and other jurisdictions move toward allowing skill-based games on the casino floor, an area in which IT is sure to have a leg up as its current fans—the company just celebrated its 30th anniversary—would certainly welcome a for-money version of Golden Tee Golf or other amusement hits.

For now, though, the company will continue its evolution as a slot manufacturer, bringing games to the big show that have proven themselves on the casino floor, and spreading to new jurisdictions. At press time, the company was waiting for final approval to expand beyond its current footprint in the West, Midwest and South to Eastern jurisdictions including New Jersey, Maryland, Connecticut, New York, North Carolina and Ohio. The company also has an international presence in Macau, the Philippines and Peru.

Schrementi says the company’s strongest U.S. market has shifted from the Midwest to the West—namely California and Nevada, where IT has corporate partnerships with Boyd and Station Casinos, and where IT games could be on the Las Vegas Strip by the end of the year through partnerships with MGM Resorts and Caesars Entertainment.

Meanwhile, IT is ramping up its game development, with the goal of launching 24 games a year.

“When we first got into gaming, everyone told us it would take 10 years to be successful,” Schrementi says. “We’re on year six, and this has definitely been the year of our explosive growth.