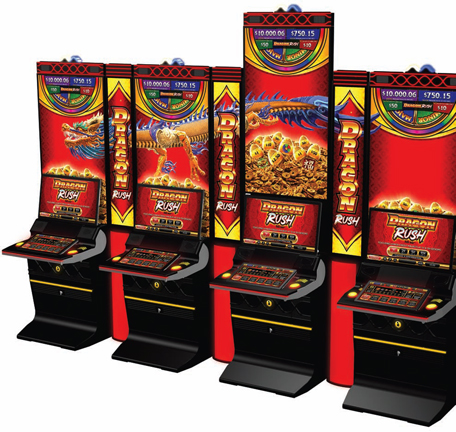 Ten years ago, Incredible Technologies, the top amusement-game company famously responsible for the legendary Golden Tee Golf tavern game, arrived at Global Gaming Expo with its first display of casino slot machines. If the ensuing decade has proven anything, it is that IT pays close attention to those who play its games, and consistently improves on what has shown to be the favorites of its players.

That continues this year, as IT draws on its most popular themes and game mechanics in augmenting all its form factors and game families.

“G2E 2022 comes at an important time for Incredible Technologies as we continue to embark on the second phase of our gaming growth plan,” says Dan Schrementi, president of gaming at IT. “Our first phase focused on North America, and building a corporate brand as an innovative and capable Class III slot manufacturer in all viable markets. This next phase for IT is focused on market diversification. Through these pandemic years we kept our staff fully employed and we invested more in R&D to fuel our goals to diversify and service more of the gaming market.

“This includes a rapid expansion of product and innovation in Class II gaming, development of cutting-edge cabinet hardware in our Prism VXP, a new product launch in the historical horse racing segment and a first-of-its- kind innovation in our new electronic table game initiative.”

The cutting-edge cabinet Schrementi mentions is a product that raised many eyebrows at last year’s G2E, the groundbreaking Prism VXP—the cabinet with the 55-inch moving flat-screen monitor that physically rises and lowers according game events triggered by a main 27-inch 4K landscape monitor and huge, 18.5-inch button deck, which doubles as an extra monitor.

IT launched four game families last year on the Prism VXP, each with special bonus events that caused the huge backdrop to rise via an industrial-grade motor. According to Kelsey Sullivan, product marketing manager for IT, the first year of operation showed the industry that the new cabinet is durable enough to stand up to 24-hour use and reliable in its operation.

“We were a little conservative with the expansion feature at first,” Sullivan says. “We wanted to see the motor operation and make sure it was going to perform as everyone expected. And it did.”

This year, IT unveils the Prism VXP Elite Package. “We’re finally able to really stretch this cabinet’s legs and show it off,” says Sullivan. “We are confident we can use the motor as much as we want, so in the Prism VXP Elite, the motors are pedal-to-the-metal. We’re using them a lot, both in attract mode and in the features.”

In attract mode, after an operator-adjustable idle period, the cabinet will go into a “wave attract” mode. The rear portrait monitor will raise and lower automatically, with banks of games behaving like a sports-arena wave. “Walking by the original out-of-session, you wouldn’t know that it moves,” Sullivan says. “So we want to show that off.” 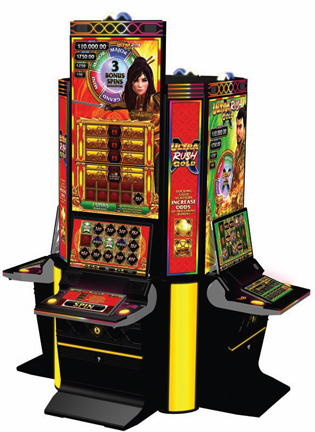 The new version of Prism VXP also features improved artwork on the “Flex Edges,” the video monitors between the games in a bank. “The Prism Flex Edges were on the original, but this is much more game-integrated,” says Sullivan.

The debut game family on Prism VXP Elite is Dragon Rush. Players will notice the improved graphics immediately in a bank setup, as the large dragon flies across all screens in synchronization.

The game itself features a hold-and-spin bonus triggered by six collected golden eggs. A short-cycle persistent feature can boost the player into the feature—if golden eggs land on the screen, they stay for three spins, giving the player more chances to get the six scatters and trigger the bonus.

There’s also an added collection feature that builds up piles of golden eggs and coins in the top box. Golden eggs that land on the reels and don’t trigger the bonus travel up to the pile on top, which will randomly pop to award bonus credits.

Other highlights on the Prism VXP include sister titles Leonidas and Medusa, which are new versions of games made popular on the company’s original Infinity U23 cabinet.

Leonidas Return to Sparta features a stacking top Leonidas symbol and a free-spin bonus with locked wild symbols for two or more Queen scatters. Randomly, Leonidas will reach down to the reel array to nudge a second symbol to the screen and trigger the bonus.

For the bonus, the VXP display physically expands to make way for a mega-wheel. Players spin for additional free spins, 2X wilds, wild stacks, or a jackpot bonus. With each free spin, wilds are added to the reels as arrows and Leonidas’ shields appear on the reels and lock in place as wild symbols for remaining free spins.

“Leonidas was one of our most successful games on the U23 cabinet, so giving it this big canvas with updated features will be a hit,” Sullivan says.

Sister game Medusa Viper’s Desire features mythical Grecian symbols including Medusa herself, the highest-paying symbol. The bonus features are basically the same, except that Medusa uses her glowing eyes to put wild symbols on the reels (naturally).

Also on the Prism VXP is Multi-Ball Blast Panda Joy, featuring a pachinko-style bonus on the big monitor. “We took the idea of a pachinko game, and we incorporated some scatters that land in the reels that look like balls, and the players do a pinball-style launch to shoot them into what looks like a pachinko board,” Sullivan says.

Any one ball will trigger the feature, and at a higher denominations of 5 cents or 10 cents, the player always gets an extra ball to shoot.

Buckets at the bottom of the screen include credit awards and jackpots. On the way down, balls can touch pegs that double or triple the prizes, or other pegs that award free games. Prizes increase in value as ball progresses down.

“Ultra Rush Gold is one of our most popular and successful brands,” says Sullivan. “This version uses similar math, with a twist on the bonus that upgrades the well-known Lock and Spin bonus feature.”

That Ultra Rush Gold game family also will appear in other product categories, including on the Infinity V55 premium cabinet, in IT’s growing Class II library, and in an HHR version.

On the V55, the Ultra Rush Gold title features the three-spin persistent feature, like in Dragon Rush, where the gold scatters will lock. According to Sullivan, there is an alternate game available on the V55 designed for markets that do not allow persistent features or players who may not want persistence.

“For those instances, we’ve taken some of the bones of Ultra Rush Gold and created Full Force Link, with a similar bonus mechanic but without the persistence.” 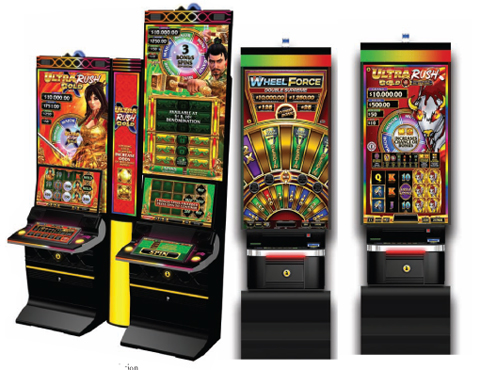 Incredible Technologies has rededicated itself to the Class II market, beginning with a major partnership unveiled at the Oklahoma Indian Gaming Association trade show in August.

IT brought its popular Ultra Rush Gold game to Class II in style at the show, in collaboration with Choctaw Nation Master Artist D.G. Smalling. The new Class II version of the game carries the same math as the original in a new package, but displays the art of Smalling. The art also is incorporated into the edge display.

“We’re really underscoring our commitment to Class II and tribal sovereignty,” says Sullivan. “We wanted to work with a Native artist. The attract mode does really neat stuff with his sketches, and it has his picture on the machine. A player outside of the community may not know who it is or why the art matters, but the attract mode helps tell that story. This is going to be a Class II property exclusive.”

The artist himself was on hand at the OIGA show, doing sketches and chatting with attendees. There was an auction at the IT booth at the show of some of Smalling’s work, with proceeds going to Native charities that help children get involved in STEAM education programs (science, technology, engineering, art and math).

“In using Ultra Rush Gold, we wanted to pair this work with one of our most successful math models,” says Sullivan. “So we thought it was a great opportunity to bring his artwork in. We’re looking at working with other indigenous artists in other regions of the country, and incorporating them into this program.”

The slot machine, along with Smalling’s artwork, was actually set up in an exhibit at the Choctaw cultural center in Oklahoma.

The other Class II game to be highlighted at G2E is Wheel Force Double Supreme Hypersonic. “This game is doing really well at its initial install locations, even up to three times house average,” Sullivan says. This one is unique in that it does not display reels—just bonus wheels. For each wager, two wheels spin side-by-side to determine the award. One wheel holds credit prizes; the other has multipliers up to 5X, bonuses and a re-spin feature. A dual-sided window between the wheels indicates the prizes won on both wheels.

A bonus wedge awards players a wheel spin for either free spins or a jackpot bonus pick-em game, in which players aim to match three jackpot amounts.

The wheels don’t necessarily yield one award per spin during paid games. On free spins or re-spins, up to five arrows can be triggered to award multiple prizes.

The slot products at IT’s booth will be accompanied by products for the historical horse racing market, including HHR versions of hit Power Wheel themes. Also on display will be the company’s first electronic table game product, a game including several table games on a platform powered by Zuum Interactive’s software.

Schrementi notes that IT’s team members overcame many challenges to put together a display for G2E that will turn many heads. “Preparing for these launches at G2E 2022 has come with a heavy toll on our staff who, like others, have worked through extraordinary times in the industry,” he says. “Supply chain disruptions, inflation issues and staffing through the post-pandemic environment forced our team to find new ways to win and reach our goals.

“These challenges continue to make us a stronger organization, and we are proud to show off our work to the industry in October.”