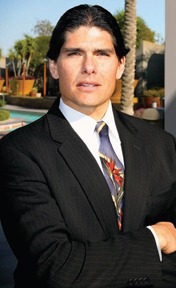 Sometimes, getting tribes to agree on an issue or work together is very difficult. But it is the mission of the National Indian Gaming Association, and one which takes some skill to perform.

Jason Giles, a member of the Muscogee (Creek) Nation of Oklahoma, grew up in McLean, Virginia, where his parents were government employees. He began his career path at an early age, when he entered the United States Military Academy at West Point in 1988. After four years, Giles emerged as a second lieutenant in the United States Marine Corps, and was honorably discharged as a captain in 1997. After leaving the Corps, he attended law school at the University of Wisconsin-Madison.

While in the Marines, Giles was posted to Hawaii, and fell in love with the state, so after graduating from law school, he returned there to work for a law firm in Honolulu, where he focused on labor law, real estate law and bankruptcy issues.

“I truly never thought I’d leave there,” he said.

But since lives rarely go according to plan, the experience Giles compiled in Hawaii became valuable in other venues, particularly in Washington, D.C. He joined NIGA in 2005 as the organization’s legal counsel and was quickly promoted to deputy executive director, where he was responsible for drafting NIGA member alerts on current gaming issues, preparing and assisting in the drafting of congressional testimony and memorandums on gaming-related issues, and organizing NIGA’s bi-annual legislative summits on Capitol Hill. Early in 2012, Giles was named executive director, replacing Mark Van Norman.

Giles quickly earned a reputation at NIGA as someone who could get something done. And in an organization comprised of many diverse tribes with many different opinions, Giles learned to listen closely to what the leaders of NIGA say.

“The board only meets once or twice a year,” he says. “So it’s important that we get them to consider the issues that are crucial to the success of the NIGA goals in Washington.”

Even between meetings, however, Giles is actively speaking to board members and important tribal leaders.

“We’ve got to keep them up to speed because things can change quickly in Washington,” he says.

One of those changes came at the end of the last session of Congress, when it became apparent there was a move to tighten up regulations on taking land into trust. Combined with the Supreme Court’s Carcieri decision, the proposals came from California senators and congressmen who were concerned that Governor Jerry Brown’s recent decisions to permit two landless tribes to open casinos would continue to spread.

“This came up quickly,” says Giles, “so we have to be prepared to respond.”

Also an issue of contention among tribes is internet gaming. Even with a carve-out in the Reid-Kyl bill, there was a significant number of tribes opposed to legalization of online poker at a federal level. But even more controversial is a tribal role in the state-by-state legalization process.

“This is going to be very complicated,” says Giles. “But we’ve put out a position paper that was agreed to by the NIGA board members. We have to stay on top of this in order to make sure tribes are treated fairly.”